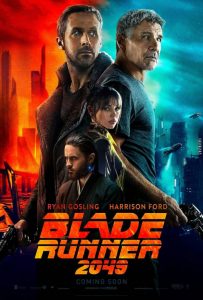 Making a sequel better than the first is no easy task, especially when the first movie in a series is regarded as a sci-fi classic. However, director Denis Villeneuve did just that with “Blade Runner: 2049.”

Released 35 years after its predecessor, “Blade Runner: 2049,” starring Ryan Gosling and Harrison Ford, was released this fall. Although the sequel was not a box office hit, this highly anticipated sequel to the cult-classic, “Blade Runner,” lived up to its expectations and is a successful continuity of the series.

“Blade Runner: 2049” is set in the same post-apocalyptic world as its predecessor and follows Officer K (Ryan Gosling). Officer K is a bounty hunter, or a “blade runner,” who tracks down robots known as “replicants” that closely resemble humans and retires them. On one of his missions, K finds a body of a once-pregnant replicant, unlocking new and unanswered questions.

This provokes Officer K to go down a journey of self-discovery, trying to find his purpose and who he really is. As K goes on his mission of introspection, he also tries to solve the mystery of the replicant he found. His findings begin to overlap with Richard Deckard’s past, the main character of the original “Blade Runner” movie.

Gosling does a spectacular job of conveying K’s loneliness and helplessness throughout the entire film. Gosling has a history of taking on unorthodox roles and usually does not stick to one certain type of part. He successfully shows Officer K’s inner battle with himself, making the viewer develop a sympathetic connection with Gosling’s character.

Harrison Ford’s performance in the sequel was highly anticipated, and he did not disappoint. Known to most as Indiana Jones or Han Solo, Ford revives his character of Richard Deckard, an ex-bladerunner in hiding, who has more to do with Officer K’s journey than they both expect. Harrison brings the rough yet caring nature of Richard Deckard back to life and adds another mysterious element to K’s already-riveting mission.

At two hours and 43 minutes, the movie is definitely longer than what is considered traditional, but “Blade Runner: 2049” is neither tiring nor boring. The cinematography keeps the viewer captivated with CGIs that make the futuristic inferno seem even more realistic than our own world. Using lifelike holograms and barren lands, cinematographer Roger Deakins does a fantastic job at having the cinematography set the mood of each scene. Between Gosling’s evocative acting and Deakins’ alluring cinematography, “Blade Runner: 2049” causes the viewer to become emotionally attached to the story, so the movie length is a non-issue.

“Blade Runner: 2049” contains many eerie aspects often present in science fiction films that keep the viewer thinking about the movie even weeks after they’ve watched it. In fact, the sequel does a better job than the original in showing the emptiness of the post-apocalyptic world and captivating the viewer’s emotions. “Blade Runner: 2049” successfully finishes Richard Deckard’s story from the first movie and also brilliantly showcases parallels between Officer K’s struggles and the struggles of main characters, mainly Roy Batty, from the first “Blade Runner.”

Even though “Blade Runner: 2049” is set in a world that seems so different from ours, it does a successful job in showing that the struggle towards self-discovery is universal and timeless.