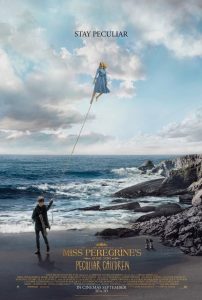 Walking along a beach, you see a boy flying a kite. Not so unusual. But as you approach, you realize it isn’t a kite attached to the end of the string at all, but a levitating teenage girl. This is just part of the whimsical world in Tim Burton’s latest movie, “Miss Peregrine’s Home for Peculiar Children.”

The story follows 16-year-old Jacob Portman, an unpopular teen from Florida, as he follows his grandfather’s dying words and a stray letter to a small island in Wales. There, he travels back in time and meets his grandfather’s childhood friends, the peculiar children, who have abnormal and fantastical abilities. He must fill in his grandfather’s shoes and defend his new friends when monsters and evil scientists come hunting.

As for the adaptation itself, there’s good and bad. The good news is that it’s a solid, enjoyable film, albeit a little confusing at times for non-readers with its brief explanations of the unique magic in the world. The bad news is that, as with nearly every book-to-film adaptation, compromises were made in the production. However, it was a fine movie, and the box office can attest to that, with a first weekend blow-out of $28.5 million.

One big change from book-to-movie is that in the movie, the abilities of two of the main characters, Emma and Olive, are reversed. A moviefone interview with Ella Purnell, the actress who plays Emma, revealed she thought director Tim Burton altered the character to avoid the cliché of a girl-with-fire love interest, as well as to make more interesting cinematography and special effects related to making a girl levitate. While some fans might find this offensive to the authenticity of the story, it actually ended up to be a pleasant change, given the reasoning. A girl who plays with fire is nothing special anymore, while a boy holding onto a rope as his crush floats through the air like a kite is something exciting and original.

Another difference is that the plot of the first book actually ends around an hour into the movie. The remaining hour is comprised of the second two books in the trilogy. The film manages to include almost all major plot points from the first book, “Miss Peregrine’s Home for Peculiar Children,” but it slacks off in the second half of the movie where long battles, complicated romances, and confusing explanations were cut short.

Asa Butterfield, who plays Jacob, presents an unconvincing cliché performance for a good half hour before he figures out his character. Samuel L. Jackson plays the main villain, Barron, as himself, unoriginal and uninspired.

This is all soon forgotten, however, as the plot picks up and the viewer is whisked away into the fantasy of the piece. Stellar performances by Eva Green and Ella Purnell, playing Miss Peregrine and Emma, respectively, shine in comparison to others. The two help add a believable and “human” emotional aspect to a movie in short supply of it.

The movie maintains a reasonable fantasy story akin to “Harry Potter” and “The Chronicles of Narnia.” In all three, average characters escape to a fantasy world where they themselves for once. This plays out for a pleasant two hours, though it isn’t exactly groundbreaking.

With Tim Burton’s classic darker angle, the movie fits well into the October and Halloween season, but probably will not live long outside the theater. Overall, it’s a fun movie to see this time of year; it just might not live up to all of the expectations of avid book-readers and probably won’t win any big Oscars.