‘Mulan’ live action remake is a sophisticated retelling of the original 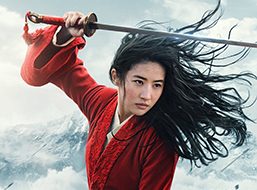 Under fair use from Walt Disney Studios Motion Pictures

Disney’s new revolution of live-action remakes has been popular among nostalgic fans. From “Aladdin” to “Cinderella” and even “The Lion King,” Disney has been turning childhood favorites into new, real-life renditions. Ever since a plan was announced for a live-action “Mulan”, many people anticipated the release of a remake. Though there were some significant changes to characters and the plot, “Mulan” provides a mature adaptation to the original movie.

The movie follows Mulan (Liu Yifei), a girl with prodigious warrior skills. Due to her rigidly patriarchal society, Mulan is forced by her family to hide her talent and exchange it for a ladylike demeanor so she can find a suitable husband.

When her frail father is forced to serve in the Imperial Army, Mulan sneaks off to the training camp disguised as a man. After a series of brutal training, Mulan emerges as a brave and courageous warrior valuable to the Imperial Army, regardless of her gender.

Like most live-action remakes, “Mulan” has some plot changes. The remake starts from a flashback of Mulan as a little girl, running through town and showing off her agility and quick reflexes, something that wasn’t shown in the original.

The live-action movie shows the town’s immediate disapproval of Mulan and establishes her as a born warrior who is forced into submission. This may help to develop a clearer background on the society in which she lives and definitely brings more depth to the level of accomplishments she later achieves. Moreover, while the original Mulan became an exemplary warrior through hard work and perseverance, the live-action Mulan was already born with a skill that many others lack. While having natural skills made her performance more realistic, it took away from the emphasis on her accomplishments of learning how to fight without any experience.

In the original movie, Mulan sings “Reflection,” wipes off all of her makeup, and cuts off her hair, knowing that she isn’t who everyone wants her to be. However, in the remake, Mulan doesn’t cut her hair, leaving out an iconic scene and transformation.

This may seem insignificant, but it comes back later in the movie when Mulan voluntarily reveals her identity. Mulan realizes that she wants to fight as Mulan, not “Hua Jun” (her male identity), and she lets her hair out, showing the world that she is no less than any other man on the battlefield.

Some viewers might be disappointed that Li Shang, Mulan’s love interest, and Mushu and Cri-Kee, Mulan’s comedic sidekicks, aren’t in the remake. While eliminating a potential romance may have been a drastic change, it brought more focus on Mulan’s journey and character development.

Mushu, however, was replaced by the Phoenix, who made occasional appearances as Mulan’s guardian. The light comedy from Mushu may have been missed, but in the context of the movie, he just wouldn’t have been a suitable guardian considering the overall solemnity.

The live-action remake did, however, add a new character, a powerful witch by the name of Xian Lang (Gong Li), who replaces the original villain Shan Yu. Although she is a villain, Xian’s role asserts dominance over her male counterparts and emphasizes the fact that a woman is just as powerful as a man. Her character and interactions with Mulan bring perspective to what it’s like to be a girl in their society.

The movie fell flat when it came to its soundtrack. While the original movie has iconic tunes like “Reflection,” “I’ll Make a Man Out of You,” or even “A Girl Worth Fighting For,” the remake didn’t have a single lyrical song except for the instrumental version of “Reflection” throughout the movie. The lack of a soundtrack was slightly disappointing as the original tunes were memorable. Despite this, the instrumental background music brought more sentiment and introspection to the plot.

While the “Mulan” live-action remake has garnered many mixed reviews, it brings new light and maturity to the animated “Mulan”. Overall, “Mulan” delivers a powerful message of women empowerment in a sophisticated retelling. Inspirational with a sprinkle of sentiment, this film is worth a watch.