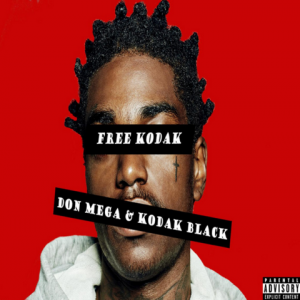 “Free Kodak” is perfect for a party setting, but a lot of the lyrics are sub-par. Image credit: Spotify

After beating a life sentence, weapon, rape, robbery, drug, and false imprisonment charges, 19-year old Kodak Black has returned and is releasing his next mixtape “Free Kodak” with the help of producer Don Mega of D-Block/Mega Muzik Production Team.

The mixtape includes tracks from previous albums, freestyles over other artists’ instrumentals, and songs Kodak has been featured on. It features some of Kodak’s best songs, but a few come short of expectations for this mixtape. This albums shows the best of Kodak but also all his downfalls. The album is perfect for a party setting with no regard for lyrics. If you’re looking for lyrics that make you think, look elsewhere.

The mixtape starts with one of Kodak’s iconic singles: “Skrilla.” The song features a catchy hook and is about of struggling with poverty and crime–a common topic in the genre. The song lacks great lyrics but the instrumental and the hook come together perfect for a party to jump to. Kodak combines rhyming lyrics with a unique drunk-sounding flow. The lyrics break the song, but Kodak’s fast-paced flow makes the song listenable and is quite similar to Ace Hood.

The next track is “Made It Out Da Hood” by Young Scooter and includes Kodak Black. The song features an instrumental produced by Chophouze. This track, along with “Project Baby,” deal with Kodak’s usual topic of escaping poverty through robbing and slinging. Although the topic isn’t new, both songs feature clever lines and an excellent beat. In “Made It Out Da Hood”, Kodak raps, “You know that money dirty, had to do my laundry/ But now that money clean, yup, money laundering.” Kodak’s lyrics flow well to the song, but in midst his verse starts slurring and becomes inaudible. Though hard to understand, never does he hesitate nor become choppy.

“4th Quarter”, featuring One Grand and Kolyon, is produced by KE On The Track. It radiates a classic ‘90s hip-hop vibe and features no hook. The song gives an excellent example of Kodak’s lyrical dexterity. A line from the track reads, “Punchline, I hit the beat with a jab / The difference between me and you, I pull up in a Jag / Fingers inching like a rash, fiending for that cash / They say ‘Kodak living good but all his b*****s bad’”. Kodak raps quickly and clearly, and the song doesn’t feature a repetitive hook like many others on the album.

The tracks “Hate On Me” featuring Humble Haitian and “Pelican” have strong beats but lack complexity. A line from “Pelican” reads, “My money long, I might need a measurement/ I’m fly, I’m high/Off this cannabis / It’s a bird, it’s a plane, it’s a pelican”. Although the beat is good, it’s not enough to save the song and it ends up disappointing.

The songs “Jewels (Whole Time)”, “I Wanna Rock”, and “Antisocial” were the mixtape’s weakest tracks. The lyrics flowed poorly to the beat and sounded generic. In “Jewels (Whole Time)”, Kodak raps, “World so cold, go put a jacket on lil boy /You better be ‘bout that action out here boy / I heard you just be flaggin’ out here boy / They say that lil s**t you be packin’ just a toy”. The lyrics and beat were weak, making them an ear sore. Some of the lyrics didn’t fit together, but just thrown together because they rhymed.

“Plug” and “Cell Therapy” are the mixtape’s best tracks. “Plug” is by Rich The Kid and features Kodak Black and Playboi Carti. The song includes fast lyrics delivered without a stutter and a well produced instrumental by Mexikodro. In “Cell Therapy”, Kodak freestyles over Goodie Mob’s “Cell Therapy”.

Overall, the 13-track mixtape shows off Kodak’s skills, which overshadows his unoriginality and ultimately sells the “Free Kodak.”