2017 Winter Fest to be combination of old and new

Winter Fest is almost here and Student Council has revealed many of the details, including what elements to expect. The 2017 Winterfest will have a combination of old and new elements in an effort to provide a different experience each time while still bringing back students’ favorite elements, said Student Council Sponsor David Moravek.

The theme is “Sweet Home Chicago” and the dance will take place on Saturday, Feb. 4 from 7:30-10:30 p.m. For the night of the dance the hallways will be covered with black paper and will feature prominent Chicago symbols, such as the Chicago skyline and the Bean.

Moravek explained, “Student Council is excited to bring back BOOM Entertainment and fun dance activities and entertainment to make this year’s Winter Fest memorable for everyone.” BOOM will be the DJ again, unlike Homecoming where the DJ was Dance Party DJ. BOOM has provided the layout for the dance, which can be seen in posters hanging all around the school. The gym will be divided into sections where different activities will take place, but all of the elements will be in the gym. The coat check will be in the atrium and a cool down station will be in the cafeteria like last year. 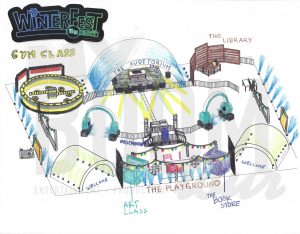 The new elements include “The Library”, where there will be a second stage that functions as a silent disco, an “Art Class”, where students can draw on dry erase boards on the walls, “The Book Store”, where BOOM merchandise will be sold, and “The Playground”, where students can play life-size games and video games like Mega Connect 4 and Mario Kart. A silent disco is where everyone has on headphones and is listening to their own music and dancing, but no one else can hear the music they’re listening to.

Lilah Kalanzi, ’18, explained, “Conant’s Winter Fest is really cool compared to other dances held at Conant because we have the privilege of having BOOM come every year with something awesome like inflatables or laser tag.”

The retruning elements are “Gym Class”, the wipe out, “The Auditorium”, which is the main stage, and “The Observatory”, which is an elevated photo booth. The wipe out is an inflatable obstacle course that made its first appearance at the 2015 Winter Fest and drew many participants and spectators but was replaced by laser tag at the previous Winter Fest. The photo booth has been at both the 2015 and 2016 Winter Fest.

Leah Pope, ’18, said, “I think it’s cool how there are so many different elements and areas.”

She added, “Freshman year the wipe out was pretty cool.”

Tickets are being sold all this week in the concession stand during all lunch hours for $20 and are $30 at the door on Feb. 4. On Jan. 26 and 27 tickets were sold for $15. Students must bring their ID and ticket to enter the dance and if they are bringing a student from another high school, there is no guest form required;the student only has to bring his or her ID. Girls are encouraged to wear shorts under their dress if they are planning on going on the wipe out.

BOOM has been more involved in promoting the dance this year and has encouraged people to go to myBOOMtour.com and to follow them on Snapchat and Twitter @myBOOMtour. They also played music in the cafeteria on Jan. 20, to encourage people to come to Winterfest.

Moravek said, “One of [Student Council’s] goals is to improve the quality of music at the dance this year, so we are asking everyone planning on attending the dance to make music recommendations. The more recommendations the better the music will be!”