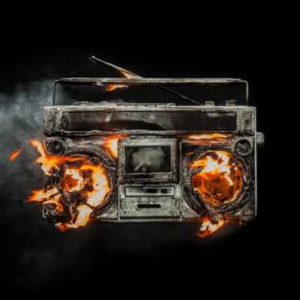 After four years of anxious waiting from Green Day fans, no one knew what to expect from the punk rock legends after the unintentional fiasco back in 2012 when they released albums, “¡Uno!”, “¡Dos!”, and “¡Tre!”. But when the trio released the single “Bang Bang” from their newest album “Revolution Radio” in August, a spark was lit and fans eagerly awaited to hear more.

The album’s first single “Bang Bang” is a politically influenced song where the band gets into the mind of a shooter. Inspired by recent shootings across the country, it’s a quick-paced rock song that pumps the drums and guitars along with constant yells of “Bang! Bang!” while giving a rightfully chilling idea of what goes through these gunmen’s minds. While the song is good, it’s concerning that the lyrics could be seen as glorifying or encouraging the shooter.

Their second single “Revolution Radio” is also politically fueled and fast paced with lyrics like “legalize the truth”. The song opens with a really strong guitar before being followed up with drums and transitioning into a quick drum, guitar, and bass trio that’s pulled off really well. While it seems upbeat like “Bang Bang,” it handles its vibrant sound and lyrics rather differently, which gives the album a nice variety.

The third single “Still Breathing” tells yet another story. Inspired by lead singer Billie Joe Armstrong’s trip to rehab in 2013 and his being sober for three years now, the song recounts how the singer feels lucky to be alive despite all his hardships. It’s a more steady paced pop song that is more quiet and mellow in the beginning, but gradually gets louder and more passionate throughout it, which is a well thought out combo. Lyrics like “I’m like a junkie tying off for the last time, I’m like a loser that’s betting on his last dime, ohh, I’m still alive” are very blunt and expressive, and the song is a bit of a tearjerker in the best way.

Green Day is not as young as they were when the band started in 1986, and they reflect on this in “Outlaws,” a song that is slower paced and grungy. The singer reflects back on all the times he shared with his band, drummer Tré Cool and bassist Mike Dirnt, and how they can never go back but they’ll always have the memories. Lyrics like “When we were forever young” and “You took a train and you can’t go back” portray the how the band dealt with these changes quite nicely.

The new influences from folk music are at their best in tracks “Somewhere Now,” “Forever Now,” and especially in the last track “Ordinary World,” with slower gentle guitar riffs and singing. It’s well tied into the alternative rock Green Day is known for and gives them a newer refreshing sound.

It’s no secret that “Revolution Radio” shares similarities with its predecessors “American Idiot” and “21st Century Breakdown.” Their new song “Youngblood” is a lot like “She’s a Rebel” from“American Idiot,” as both are shorter fast-paced songs about the singer’s affection and admiration for a rebellious girl with a heart of gold. “Still Breathing” has similarities to “See the Light” from “21st Century Breakdown,” in terms of being a long ballad about perseverance in the face of doubt. While one could argue these are too much like their predecessors, they offer a versatile sound and lyrics that are original enough to stand well on their own.

“We don’t want to tell people what to do,” Armstrong once said regarding the politics in some of the band’s songs. “We just want them to think.” One should think about adding Revolution Radio to their music collection, with its gritty and sentimental lyrics and sounds that tie together nicely to make a nostalgic yet fresh album.