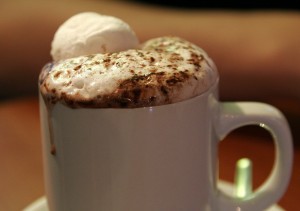 Until now, I was only acquainted with the Swiss Miss I make at home and the annual hot chocolate from the Christkindlmarket down in the city. But after doing some research, I have discovered a variety of different recipes for making delicious hot cocoa. But first, let’s take a mini history lesson on hot chocolate.

Hot chocolate is a beverage that typically consists of shaved chocolate, melted chocolate or cocoa powder, heated milk or water, and sugar. The first hot chocolate, or chocolate beverage, is thought to be created by the Mayas around 2,000 years ago and was an essential part of Aztec culture by 1400. It served a financial, nutritional, and religious purpose and was especially considered sacred. This drink was used during initiation ceremonies, marriages, funerals, religious ceremonies, as an after dinner drink, and more. It was also used to treat sicknesses and diseases. Mesoamerican chocolate, like most dark chocolate, was bitter. So to add a kick, they added things like maize and chili peppers.

The beverage eventually became very popular in Europe, and from there the recipe has been revamped over the years.