A peek into the different holiday traditions in the Conant community

The smell of freshly baked cookies, the views of the bright lights decorating houses, and the togetherness of family is what many people experience during this time of year. Sometimes Christmas may overshadow the other holidays and traditions of many people who don’t celebrate it. For most however, this time of year is underlined by the time spent with family, as these Conant students mention.

Grace Meitzler, ‘18, devotes her time to family over the holidays. Over the years, her family has kept the main traditions such as gift giving, along with a few ethnic twists. 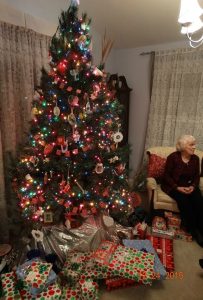 Every year, Meitzler and her immediate family get together on Christmas Eve for dinner at her house. They make pot roast and “snowballs”.

Snowballs are a family recipe which consists of peppermint ice cream shaped into a ball, covered in coconut, on a plate with chocolate sauce. After the they have dinner, Meitzler said they clear everything away and read the Christian Christmas story. Following the story, they open presents starting with the oldest person.

However the traditions don’t end there. On Christmas day, Meitzler usually has a family party in the evening for her extended family. Meitzler mentioned it was a time when her family and her can goof off and give gifts to children under 18.

Something her family does every year is make two types of Christmas cookies and a German bread called julekage. Meitzler is of German and Norwegian descent, and she described the bread as “a fruitcake but not nasty” and that it’s “flavored with cardamom and really really tasty.”

The holidays mean something different to everyone, and to Meitzler, Christmas means family. Meitlzer’s traditions are unique to her because of the familial way that it happens. “We spend more time on family and togetherness and enjoying each other’s presence than enjoying each other’s presents,” Meitzler explained. “All I can think of when I think of Christmas is… that this is a family that I have, and we’re all getting along.”

Hanukkah through the eyes of Megan Berger

With the small number of Jewish people that go to Conant, many might not know of their customs and traditions. Megan Berger, ‘19, is Jewish and she shared her special way of celebrating Hanukkah. 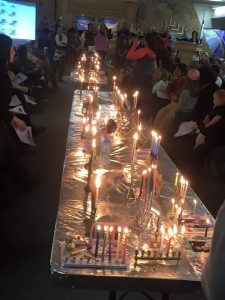 Menorahs from each family at Megan Berger’s temple

Every year Berger goes to temple and then has a family party at a relative’s house afterward. At the party, they typically light the menorah and give gifts. Berger and her family usually go out for Chinese, since it’s the only store open at that time.

Berger and her family still drive around to see the Christmas lights on houses. While most people celebrate Christmas, Berger occasionally feels left out because she can’t relate with them. “Yesterday my art teacher was like ‘but Christmas is a national holiday’ and I’m like ‘Okay, well I don’t celebrate anything like that so I can’t really relate,’” Berger explained.

Despite these differences of opinion, Berger still finds that her holiday is unique because not a lot of people celebrate Hanukkah. Berger explained that Hanukkah celebrates miracles. “The whole story was that there was some oil and it’s was only enough to last one day but it made a fire for [the Jews] to last eight,” Berger said, “so it’s the miracle of light.”

The tradition is that they light the candle for eight nights, so for each day they light one of the lights and keep going until the last night. They typically light the candles around six or seven in the evening when the sun goes down along with a prayer.

While there are many who celebrate Christmas and other holidays, there are also some who don’t celebrate anything during this season. Farisa Khan, ‘17, is Muslim and doesn’t have any particular holidays being celebrated during this time of year. 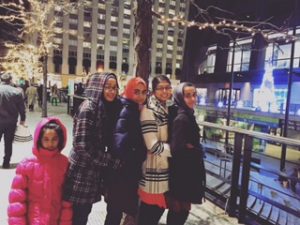 However, this doesn’t hold Khan back from enjoying the decorations on people’s houses. “I love going out and looking at all the holiday decorations that people have out, as well as the festivities in stores and restaurants,” Khan said.

Khan said she never feels left out when she’s not celebrating any holidays and believes that everyone has their own holidays to celebrate while she has her own customs.

One of the customs she follows in her religion is celebrating Eid, a Muslim holiday celebrated twice a year. Since they follow the lunar calendar, the holiday moves up ten days every year. If Eid were to occur in this season, they would celebrate it normally regardless of the other festivities.

During this holiday, people give gifts and spend lots of time with family. They also have morning prayer and tons of food. Khan said that when she was young, she used to go to her grandmother’s house after the morning prayer. Now that her grandmother moved to California, Khan and her family meet up with very close family friends. “It’s a very special and uniting part of my life. It brings me closer to the people I know and love,” Khan said.