For some students, “turners” or modified cars are a fascination not limited by anything but the law. These students all share a common interest in customizing their rides. Sometimes their hard work may go unnoticed, so The Crier decided to share stories of three Conant turners and their prized possessions. 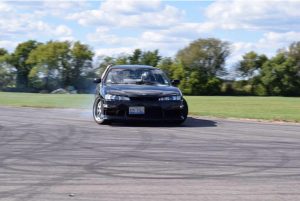 Czubek drifts on an open road.

Nick Czubek, ‘17, spends his free time at Great Lakes Dragaway in Union Grove, Wisconsin, sliding around in his 1997 Nissan 240SX S14 “Kouki”. Czubek is involved in drifting, which is the sport of losing traction on purpose while still maintaining control.

For some, having a car lose grip on the road is an accident waiting to happen. For Czubek, however, his whole car is built around going sideways. “My favorite modification to this car is the coilovers. It allows me to adjust my ride height. Lowering or raising your car can make a day-and-night difference in how it handles,” said the aspiring drifter.

Other drifting-oriented modifications include a racing seat, which is a seat made to hold one person; quick release steering wheel, a steering wheel that can be removed with the push of a button; and a limited slip differential, a device which automatically reduces the loss of drive which can result from spinning wheels on one side of an axle. The racing seat is fixed-back, which means it doesn’t recline and adjust. The benefit of this, Czubek said, is the seat is more rigid in the case of accidents and prevents the driver from slipping when making high-speed turns.

Although the seat keeps him planted, Czubek said it also makes it difficult for him to get in and out of the car. That’s where his aftermarket steering wheel setup comes to the rescue. Having the quick release function allows him to remove the wheel and give him more space to climb into the car.

“The car isn’t perfect. The body is a bit rough, but it’s mechanically sound, which is rare especially for an almost 20-year-old car!” Czubek exclaimed. ”Spotting these cars is quite uncommon, and all the looks I get from people make all the hours of work worth it.”

Wally Schroeder, ‘18, is an avid member of the Engineering and Automotive Club, and he maintains a mundane-looking sedan. However, it is anything but ordinary. 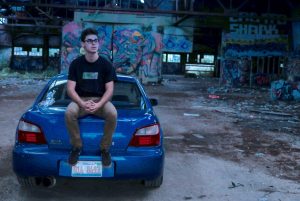 Schroeder sits atop his Sudan.

“The car isn’t fitted with flashy body kits or wings, but the beauty of it is under the hood,” Schroeder said. “Because of U.S. restrictions, Domestic Market WRX’s have a weaker engine that complies with U.S. emission standards.”

Schroeder’s Impreza WRX has a motor swapped from a JDM (Japanese Domestic Market) WRX STi, which is a more expensive and track-oriented model of the WRX.

The Japanese engine has stronger internals and handles more power. To complete his swap, his engine is fitted with a custom 3in exhaust and K&N Intake, which is an assembly of parts used to bring relatively cool air into a car’s internal-combustion engine.

While most modifications are under the hood, there’s a few subtle exterior changes that may go unnoticed. The car is lowered on Raceland Coilovers, an automobile suspension device, and is paired with gold Enkei T6S wheels.

“I chose gold for the wheels because I think it really complements the ‘World Rally Blue’ and keeps the signature Subaru color scheme,” Schroeder explained.

Schroeder retained the car’s original look while still adding subtle tweaks to make his car stand out from the other WRX’s. He says he lets the interior of the car “do most of the talking.” 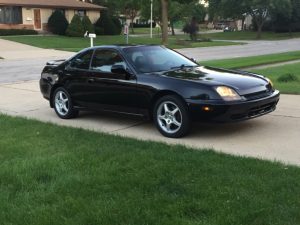 Scott Gurke, ‘17, blends into traffic well, but his car doesn’t get to show its potential on public roads. On the track it’s a different story.

“No shiny blue or red for me,” said Gurke, patting his sleek black car. Just like Schroeder’s car, the biggest thing that sets Gurke’s car apart is underneath the hood.

The Prelude has an engine swapped from a Prelude Type S, a high performance model only sold in Japan. This means it bypasses United States vehicle regulations and restrictions.

“The car stays true to its roots,” Gurke said. “The motor gives the car a huge bump in power and reliability.”

Gurke doesn’t plan on crazy exterior modifications. He said that the original look of the car combined with the JDM motor really shows off its Asian heritage.

Topped off with a Greddy Exhaust, Gurke has been successful in making a car that can turn from a daily driver to a race car in the stomp of a pedal.