Once his player, now his colleague: Assistant football coach reunites with head coach

On Friday nights people can see Varsity Football Assistant Coach Jon Janus coaching the outside linebacker position and the special teams. But what people don’t see is Janus’s coaching relationship with Head Coach Bryan Stortz that goes back for over a decade.

A high school star, on and off the field

Janus played basketball and football for Stortz back when he was attending Lake Zurich High School more than 10 years ago.

“First drill we ever did, [Janus] splits his chin open on the basketball floor, and we called his mom, and she said stitch him up and get him back in there,” said Stortz, who was Lake Zurich High School’s head freshman basketball coach in 2004.

According to Stortz, this was the beginning of Janus’s toughness. “I saw a guy who was one of the most competitive spirits I’ve been associated with,” Stortz said.

At football camps, Janus was always the last guy to give in, Stortz added.

Stortz became the head coach of the Lake Zurich football team in 2006. As a head coach, he coached Janus’s junior and senior seasons and saw him become a team captain.

Janus said that Stortz was the coach that pushed Lake Zurich football to the next level by encouraging the team to get stronger every day in order to win their first and only state championship in 2007.

“Going into me senior year we could’ve looked at it two ways. We could’ve been content to making a state championship game or how do we take the next step as coming home as a champion. We were able to do that and [Stortz] was the guy that pushed to find it within ourselves to get better and better,” Janus said.

Stortz said he has many memories of Janus displaying his resilience during games. 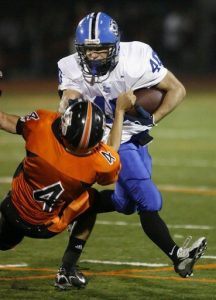 Janus pushes a defender down.

In the 2006 7A state championship game, Janus broke multiple tackles and carried three St. Rita High School defenders into the end zone for Lake Zurich’s first touchdown of the game.

In the second round of the 2007 7A state playoffs, Janus injured his shoulder to the point where he couldn’t lift his arm above his head. While Stortz’s coaching staff decided not to let him play defense, they still allowed him to run the ball on offense, and he fought on.

During the state championship game that year, Janus scored the only touchdown of the game on a 4th-and-goal.

According to Janus, playing for Stortz was, “Hard, difficult, and at times, he pushes you to the limit. It’s demanding, but it’s rewarding.”

Janus said the entire Lake Zurich community was very supportive of the team. In one particular instance, he remembered heading over to an elementary school class after he received two cards from students asking him about the condition of his shoulder during the playoffs.

Janus said it was a big deal for the small town that had never won a state championship in any other sport. “The community was so inspiring to play for, not just the high school. It brought together elementary schools as kids were excited to go to the games and meet the players,” Janus said. “It feels like this was yesterday.”

After Janus graduated from high school in 2008, he decided to play football at Elmhurst College. 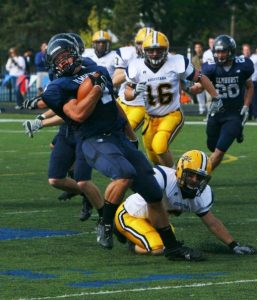 “I was disappointed,” Stortz said. “I say that jokingly because I’m an Augustana guy, so I knew he would be the competition now. I had to root for a guy against my alma mater.

“But my initial reaction was that Elmhurst was getting the best of the best because I knew Jon was going to make that team better,” he added.

At Elmhurst, Janus played for current Western Michigan Head Coach Tim Lester and won numerous honors, including being a team captain. He was also elected to be an all-conference player by the coaches of his conference for all four years.

The college experience was a lot different for Janus than at Lake Zurich. “What I didn’t realize when I went to Elmhurst was going from a culture where a community is behind you, where they’re thousands of people at your game to playing in the middle of Michigan with 200 people at the game,” Janus said.

In 2012, Stortz became the new head football coach at Rock Island High School. He searched for new assistant coaches and found one in his former team captain.

“We told him we’ll get him a sub job out here and see if he wanted to get into the world of coaching because we thought he would be great at it,” Stortz said.

However, the plan took an unexpected turn. Janus, who has pancreatitis, became sicker as the year progressed. He was originally supposed to get an apartment in the Rock Island area, but his sickness prompted him to live with Stortz.

“I lived with Stortz for about four months. Within those months, I was sick for two of them, and I was in-and-out of the hospital for a month,” Janus said. Janus had to have his gallbladder removed during his stay in the hospital.

Janus left Rock Island after a year when he decided to earn his teacher’s certificate to become a Physical Education teacher and continued on to coach football at Glenbard South, St. Viator, and Fremd High School before reuniting with Stortz at Conant.

When Stortz took the head coaching job this school year at Conant, he decided to contact Janus, who was coaching at Fremd. Stortz and Janus ended up on the same coaching staff again at Conant.

Janus said he and Stortz are currently focused on learning about the CHS football culture and its history while they decide what changes need to be made.

“The student body that we have is fantastic. The student support we have at home games is overwhelming. It’s great to see that even 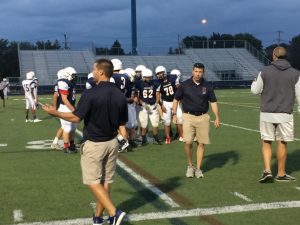 though the program has not been as successful recently, people are still there backing us and cheering us,” Janus said.

Janus said that Stortz demands a lot out of the players, even when it’s difficult and tiresome, but he still thinks it’s rewarding at the end.

The players think highly of the duo being on the same coaching staff. “It makes a big difference that Stortz coached Janus. We can relate to how Janus felt with Stortz,” Dominic Giannini, ‘18, said.

Stortz said, “Jon is, without a shadow of a doubt, a fox-hole guy.”