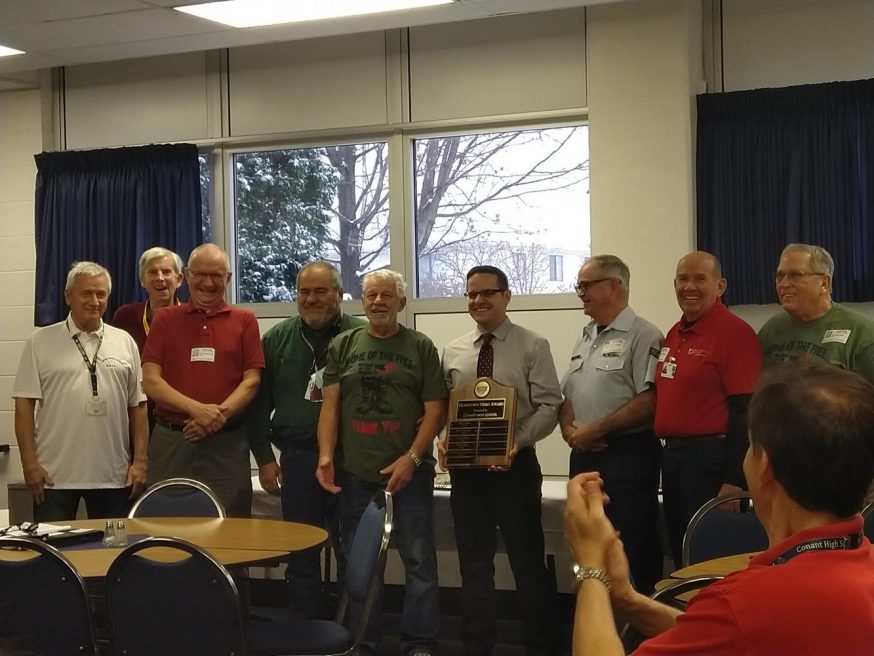 This morning, Bruce received Conant’s Hometown Hero Award, created by retired teacher Frank Kernats. The award aims to recognize the service and sacrifice of veterans in the Conant community. Bruce is the sixth recipient of this award since its inception in 2014.

Bruce grew up in Ketchikan, a small town and rainforest in Alaska. An avid Eagle Scout, Bruce knew he wanted to serve his country by joining the military.

“I knew [that] having a military is very important, and many people don’t want to do it or [are] not capable of doing it,” Bruce said.

Bruce was in the ROTC program from 1994 to 1998, where he was a full time student at the Massachusetts Institute of Technology. However, instead of spending his summers interning at a company or studying with professors, Bruce trained with the US Navy.

He explained, “[Training] took me all over the planet. My first summer I was in San Diego. My second summer I was in Singapore, Malaysia, [and] Thailand. And my third summer, I was in the Mediterranean Sea and off the coast of Portugal and Spain in the Atlantic.”

When he graduated college, Bruce received additional extensive training on how to operate a nuclear reactor and the inner workings of a submarine. He was then stationed to a submarine out of Groton, Connecticut. For the next few years, he lived on the submarine or worked at a shipyard being an engineer and/or monitoring a nuclear reactor.

Eventually, his work began to take a physical toll on him. “Personally, I had a really hard time with sleep deprivation. When you’re on a submarine, there’s no daylight because you’re in a steel tube for days or weeks on end, and your sleep schedule is governed by what’s called a watch cycle,” he said.

“It was really, really hard for me.”

After being on the submarine and shipyard, Bruce was stationed at the Naval Satellite Operations Center, where he was in charge of numerous US satellites.

“Think Houston, like Houston, we have a problem. [In] Houston, those operators, that equipment, and those antennas that are talking to the satellites. I was responsible for [our] ground stations [and] for our big network of satellites,” Bruce said.

“[It] was really cool because I was 27 years old with an insane amount of responsibility and authority. [There were] billions and billions of dollars of satellites that I was responsible for.”

Bruce decided to leave the Navy in order to start a family; however, he owes a lot to his time in the military. Through his experiences, Bruce had the opportunity to delve into technical topics like electrical engineering, nuclear engineering, mechanical engineering, fluids, electronics, and various types of chemistry. He also had the opportunity to learn the telecommunication side of satellites and got to work with programming departments while in California.

In fact, everything Bruce has learned, he attributes to the military. “[In] college, you learned to suffer and persevere. After college is when you actually learn everything, like learn all the content. You’d think it would be the other way around because in college you’re spending [all of your] time in books and taking tests.”

“[However,] it was the military where I learned everything,” Bruce said.

After working with satellites, Bruce moved to the Chicagoland area where he received his favorite title — teacher. Still, during his first three years teaching at Conant, he was a reservist, where he oversaw military science experiments.

Today you can catch Bruce in the Conant science department, where he teaches physics and physical science throughout the day. Bruce is also the sponsor for Conant’s Robotics Club and codes all the simulated experiments Conant Physics uses for its labs.

Vinaya Pillai contributed to this story.

Sabah is a Team Editor and a senior at Conant. She is excited for her first year on the Crier staff. At Conant, she is captain of the Debate team and involved in BPA, Principal’s Advisory Board, and National Honors Society. Outside of school, she writes for a Gen Z social justice magazine, works at a female empowerment foundation, and volunteers at her local mosque. Besides all the boring stuff, Sabah likes puns, poetry, politics, and the occasional Netflix binge.