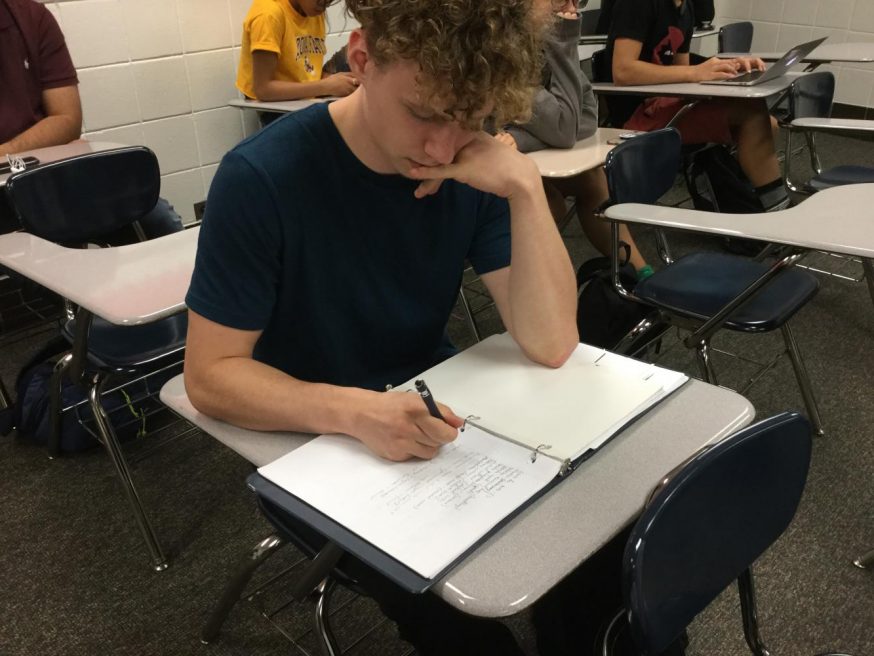 Daniel Glinski, ‘19 works on a piece during his creative writing class. Students participating in Author Day submit their own work in order to present.

With the collaboration of English Department Chair Susan Hess and librarian Dr. Cynthia Taylor, Conant High School will be hosting its first Author Day on Oct. 25 in the auditorium. Professional writers will speak to students about the writing process, and Conant students will be given the opportunity to share their own writing.

Inspired by Fremd High School’s Writer’s Week, Hess wanted to do something smaller scale to reach Conant students. “Dr. Taylor had mentioned the opportunity to have some authors occasionally, so I thought we could piggyback on one of the authors that is coming here and make a whole day of it,” Hess said.

To reach a wider audience, Hess and Dr. Taylor tried to bring in authors of various genres and backgrounds including nonfiction, comic books, racial diversity, and the STEM field. “We thought that [by] pulling these four together, we covered the gamut of people that we have here in this school and that we would have something that would appeal to just about everybody,” Taylor said.

Authors were found locally and some, even closer to home. Conant English teacher Andrew Guilde has published two issues of his comic book and will be sharing his writing process with students.

“We’re trying to incorporate him to show kids that you don’t have to be somebody famous, we have professional writers right here in our backyard,” Hess said.

Inspired by authors such as Alan Moore, Brian K. Vaughan, Grant Morrison and many others, Guilde hopes he can inspire students as well.

“I remember being a high school kid and having these stories and not believing it was something tangible or it was actually something someone could do. I think it’s my responsibility, not only as a teacher, but as an adult to share with the young people that it is okay, it is real, and that you can do it,” Guilde said. 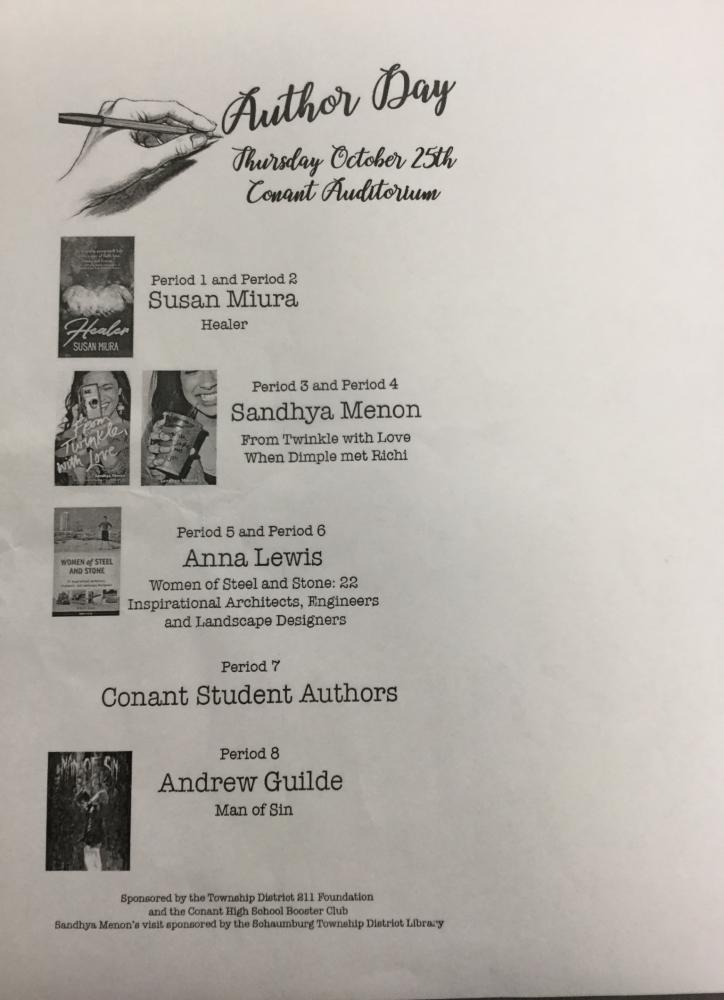 Students will also be given the chance to perform their own pieces, including short stories and poems. While a majority of the day will consist of authors presenting, seventh period will be dedicated to students sharing their own creative writing. Students have already submitted their work in order to be able to present.

Author Day was made possible by grants from Township District 211 Foundation and Conant High School Booster Club, as well as in collaboration with Schaumburg Township District Library. Taylor said, “Without them, we wouldn’t be able to get the number of people that we have.” Hess and Taylor both hope to expand Author Day next year, for more than one day and to give more time for student pieces.

While Hess and Taylor hope to attract many students with Author Day, they also hope to inspire students to have a different take on literature. Hess said, “I know we assign a lot of reading in a lot of our classes, but I want them to see literature and writing in a positive light… Who knows, we might have the next professional writer sitting in our audience.”