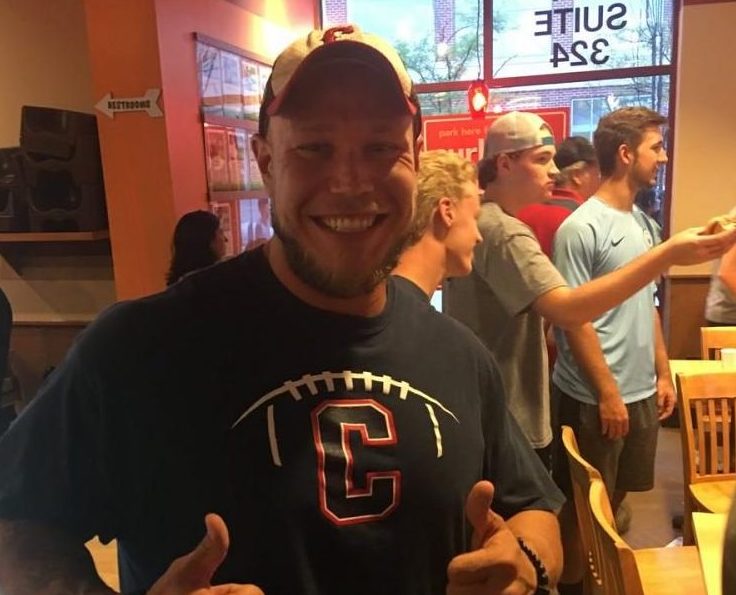 On Tuesday night, Conant and Elk Grove High School competed against each other in an unexpected place: Meatheads. Inside the burger joint, two football players, one cheerleader, and a coach from each school went head to head in a burger eating contest.

Students and parents from both schools cheered as the competitors scarfed down three triple cheeseburgers as fast as they could. After several suspenseful minutes, Conant fans were finally able to celebrate as assistant football coach Bert Blodgett finished his tray first in six minutes and three seconds.

“My strategy was to dip the buns in water,” Blodgett said. “[I] put all the patties aside, get all the bread down, and go for the meat. It seemed to work out pretty well.” This was Blodgett’s first eating contest, and he received a 100 dollar gift card from the establishment for his quick eating.

Blodgett added that his victory should add momentum for the football team heading into Friday’s game, which is at Elk Grove. “Sure, it’s a hamburger eating contest, but we saw the kids compete in everything we do in practice, in the classroom, on the field — we want to be constantly competing. I don’t want to be a hypocrite. I got to go out and compete myself — got to get the game face on,” Blodgett said. 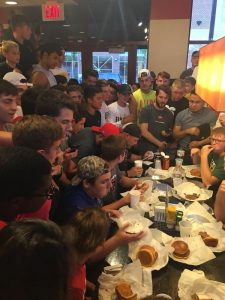 Students and parents from Conant and Elk Grove High School cheer for their respective schools during a burger eating contest at Meatheads.

The other Conant participants were football players Tony Datoli, ‘20, Derek Lewandowski, ‘20, and cheerleader Gianna Catania, ‘20. Lewandowski, who finished two and a half cheeseburgers before the competition was over, said he would have finished the last half if he had the opportunity to.

Athletic Director John Kane said he estimated that 100 people came out to support Conant and added that it was an unbelievable turnout.

Lewandowski said, “That is exactly what I want from Conant support and I would do it again, but I would have to take a few days.”

The event took place as a fun event before the schools faced off against each other on Friday, and both schools have students residing in Elk Grove. Football player Luke Vanbooven, ‘19, said, “It was fun. It’s just a little preview of what’s it’s going to be. Me personally growing up against those kids and a bunch of other players on the team — it’s fun.