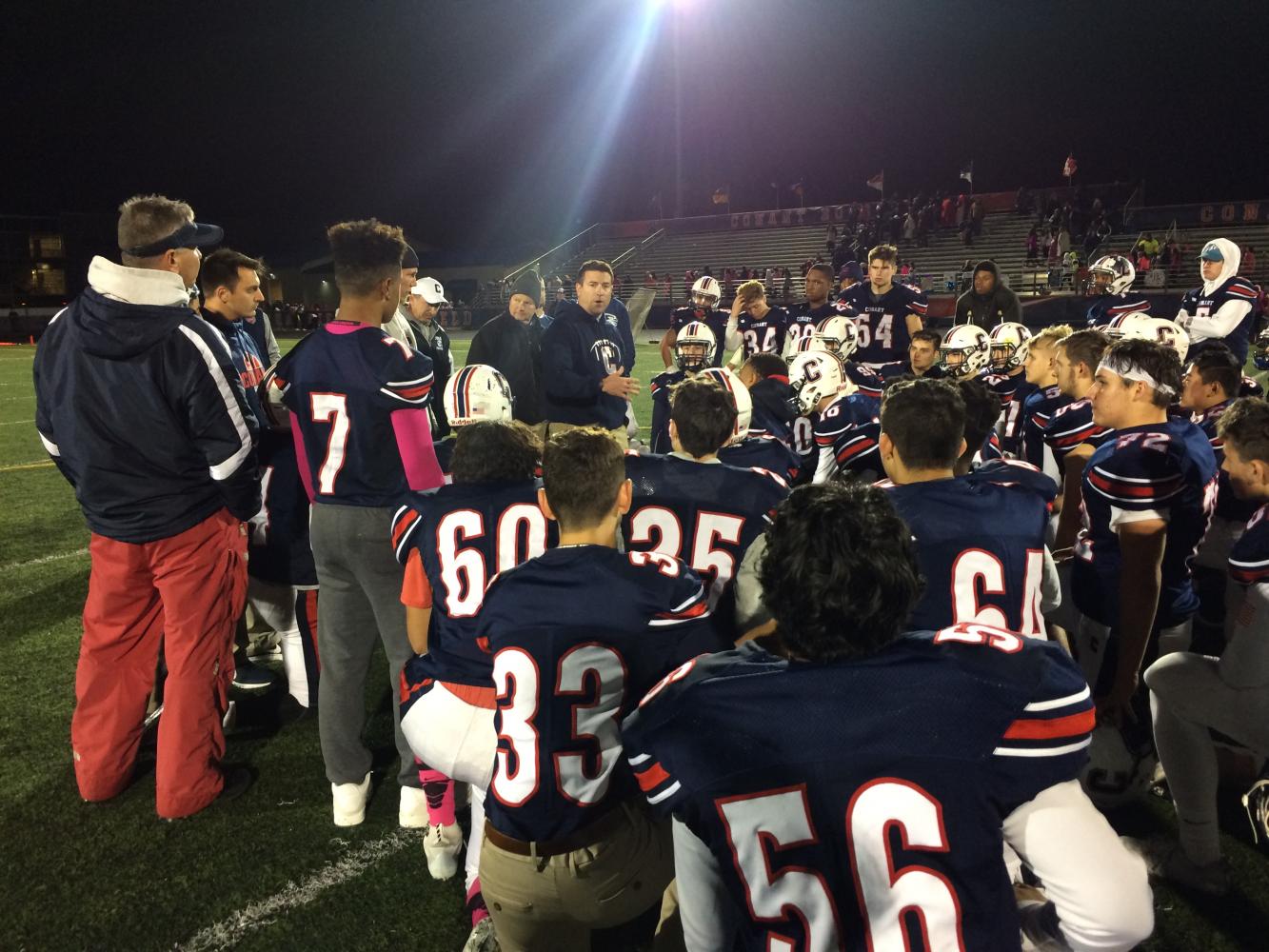 After losing to Hoffman Estates 29-27, head coach Bryan Stortz talks to his team.

Vying for a perfect record in the MSL West and trying to win the Mayor’s Cup for the first time since 2014, the Cougars came up short in their efforts last Friday, losing to the Hoffman Estates Hawks 29-27. The Cougars finished the regular season at 6-3.

The Cougars missed several opportunities that could have changed the outcome. The first came at the end of the first half, when the Cougars had the ball on the Hawks 37-yard line after a defensive pass interference penalty that led to one untimed down. Quarterback and captain Kevin Polaski, ‘19, threw a pass downfield to wide receiver Luke Vanbooven, ‘19, who caught the ball at the 5-yard line and was tackled inside the 1-yard line, ending the half with the Hawks leading 13-7.

“Obviously, it could have been a difference in the score there,” head coach Bryan Stortz said. “But it was a heck of a play by our kids to be in a position to make that play. Luke was an option…that we were trying to get to early on it, but the way that [the play] came out — Kevin had to move out the pocket, so he wasn’t able to get to him as quick as he wanted to. The kids executed it. It’s just that those [Hoffman Estates] kids made a play at the end of it.”

Another missed opportunity for the Cougars came in the middle of third quarter, when linebacker and captain Anthony Wachal, ‘19, intercepted a pass at the Hawks 35-yard line. The ball was then moved to the 20-yard line after a personal foul was called on the Hawks following the interception. The Cougars ended up losing four yards on the drive and scored zero points.

The last major missed opportunity came when the Cougars had the ball with over two minutes to go as the Hawks led 22-20. On the second play of the drive, Polaski fumbled the ball, giving the Hawks great field position at the Cougars 37-yard line, which lead to the game-winning touchdown by the Hawks.

Polaski said, “The pick that [Wachal] had we gave up that possession. I can’t fumble the ball with a couple minutes left in the game. There’s a few things we should have done differently.”

Like in previous games, the Cougars did have multiple players score. Running back Bradley Spates, ‘20, started the Cougars’ scoring with a 65-yard touchdown. The Cougars were the first team to score in the second half, as Polaski threw an 11-yard TD pass to Wachal. After the Hawks took a 16-14 lead, Polaski found running back Joey Perez, ‘19, for a 62-yard TD. The Cougars failed on two-point conversion attempt.

After Hoffman took a 29-20 lead with under two minutes to go, the Cougars did get another TD,  when Polaski scored an 11-yard rushing TD with 40 seconds to go, but they failed to recover an onside kick that might have given them a final opportunity to win the game.

The Cougars will play at Hinsdale Central on Saturday at 1 p.m for the first round of the Illinois High School Association Playoffs.

Polaski said, “[We] just know that this feeling isn’t what we want to do again, so there should be plenty of motivation for us to push forward and find a way to win.”