Conant falls in the 2nd half 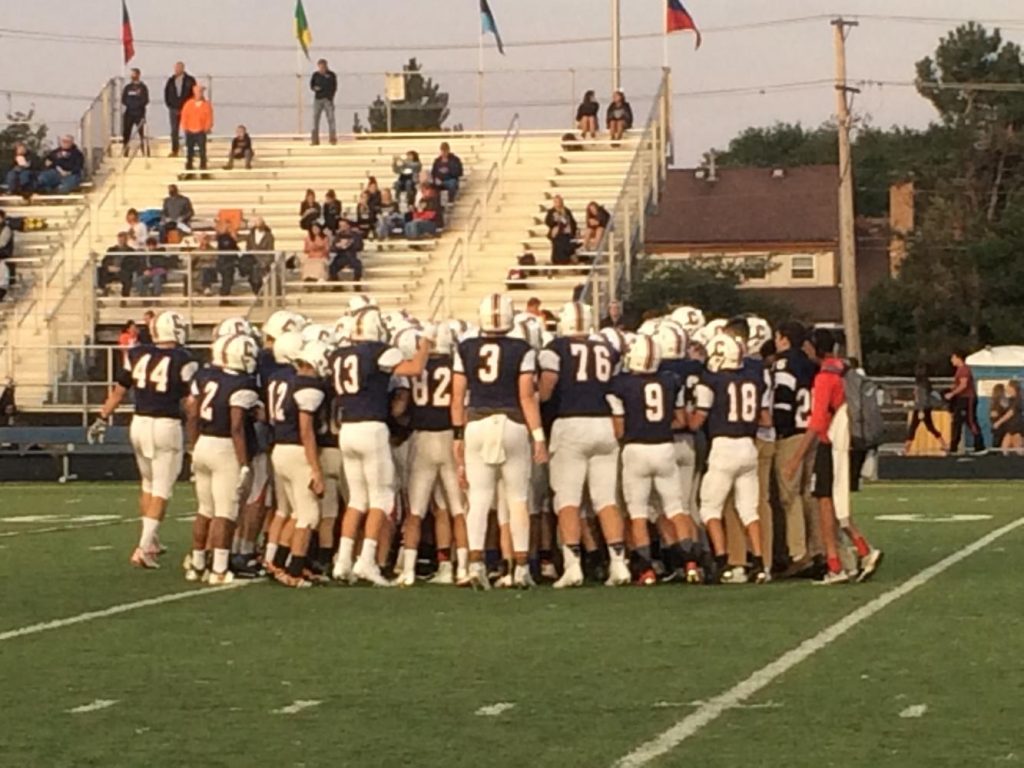 The team huddles up before their second game of the season.

The score at halftime was looking good for Conant as they had an 8-0 lead. However, two 40-plus yard Buffalo Grove touchdowns in the 2nd half and Conant’s struggle to finish offensive drives led to a 14-8 loss for the Cougars.

After that drive, both teams punted the ball once, and Buffalo Grove got the ball back late in the 3rd quarter after Buffalo Grove defensive end Justin Gold, ‘18, sacked Conant quarterback Matt Majer, ‘18, at the Buffalo Grove 46 yard line.

The Conant defense set up a 4th-and-inches situation for the first play of the 4th quarter. Buffalo Grove running back Tom Trieb, ‘19, ran a 45-yard touchdown after a missed tackle by Conant in the backfield.

The Conant offense had two solid opportunities to score after that drive, their last one coming after a fumble recovery by Thomas Salat, ‘18, at the Buffalo Grove 47 yard line with 2:20 left in the 4th quarter. But Majer was sacked at the Buffalo Grove 36 yard line on 4th down, ending any chance for a Conant comeback.

“We shot ourselves in the foot on those two drives. We were able to move the ball well all game, and then the offense stopped themselves once we got down the field. I take blame for that,” said Majer.

Conant scored on the first possession of the game when running back Jack Reiger, ‘18, scored a 5-yard touchdown and a two-point conversion with 7:10 to go in the 1st quarter. This would be the last time Conant scored all game.

Conant coach Bryan Stortz said, “Offensively we got nine or ten guys doing the right thing and we have one, maybe two guys not executing, and that kind of killed us.” Stortz also said the team had similar problems on defense and special teams, including not having 11 players ready to go on special team plays.

Majer plans to have the offense executing better. “I have to step it up as a leader and be more vocal. We start off strong as offense and then we make a lot of mental mistakes, and that we will fix.”

Coach Stortz said the team is focusing on correcting its mistakes this week in practice as they prepare for their first road game of the season at Glenbrook South on Friday.

Majer said, “This week we’re going to bring new intensity to practice and fix our mistakes that we made in the game. We have to focus on the little things that can change the outcome of the game.”