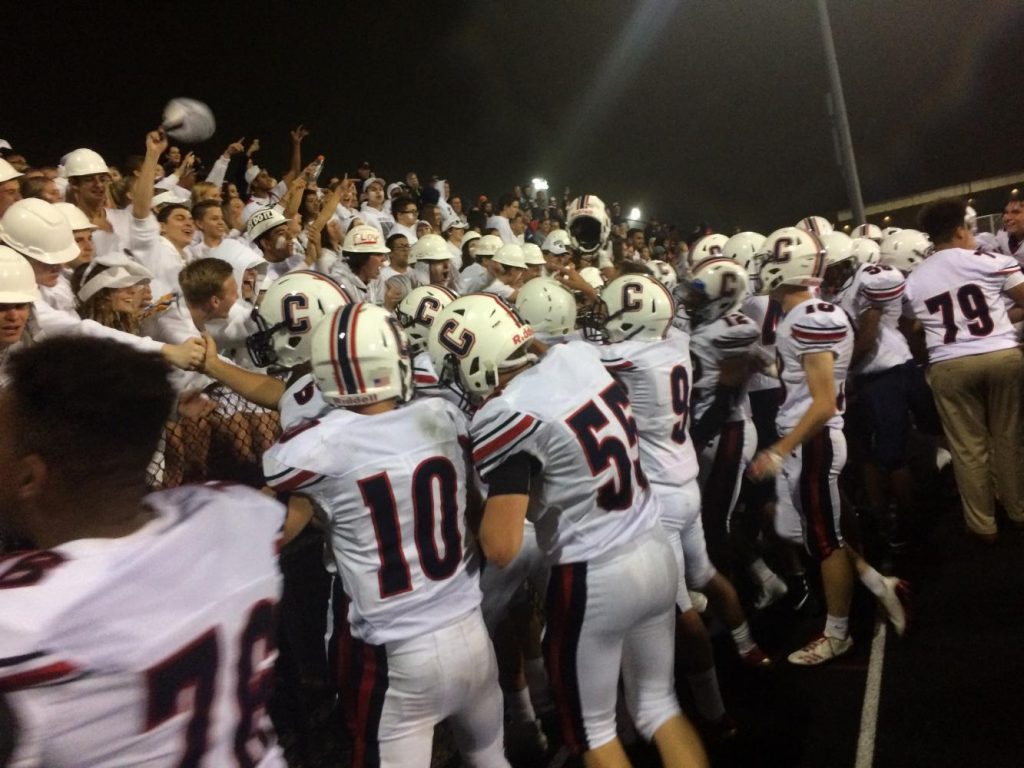 After winning their first road game in three seasons, the football team celebrates with the Cougar Crazies.

With just under three minutes to go in regulation, Conant had the ball on their own 33-yard line with the game tied at seven at Addison Trail. Last year’s football team lost five games by one possession, including three in overtime, but this season’s team was determined not to let that happen on Friday night.

Running back Malik Frederick, ‘21, capped off a 67-yard drive with a 9-yard run play for a touchdown with just under 30 seconds left in the game.

“It feels great,” Frederick said. “I owe it all to my O-line. I couldn’t do it without them.” Friday’s game was Frederick’s first as a varsity player, and he gained 44 rushing yards on the Cougars’ final drive. “I just worked in the offseason, worked in summer camp, and earned my spot up here,” Frederick said.

Quarterback Kevin Polaski, ‘19, said, “Malik stepped up to the plate. He played unreal for us.”

Friday’s game also showed that this team could win close games, which they were unable to do last year. Head coach Bryan Stortz said, “We learned from last year. Our kids took all of the tough things that happened last year and learned. They grew from it — they came in the offseason and attacked things to be able to finish games when they needed to.”

Stortz added that the team made many mistakes but were able to find a way to win.

Polaski said, “I think we just knew we were a better team, we were just shooting ourselves in the foot. So we knew we had to put one possession together and just put a drive together, and we knew we could do it.”

Both teams mostly used run plays during the game. However, the first scoring play of the game came on a pass, as Polaski threw a 45-yard TD to wide receiver Luke Vanbooven, ‘19, with just over a minute left in the first quarter.

Addison Trail running back J’Lan Williams, ‘19, tied the game with just under three minutes to go in the fourth quarter on a 3-yard rushing TD.

Both teams had two turnovers. The Cougars fumbled the ball twice, while the Blazers threw two interceptions. One was to Ryan Schar, ‘19, and the other was to Jeremy Betancourt, ‘20.

The Cougars will play their second of three consecutive road games at Elk Grove on Friday. Stortz said he wants the team to practice finishing offensive drives this week, as the Cougars had two drives in the red zone against the Blazers that resulted in zero points.