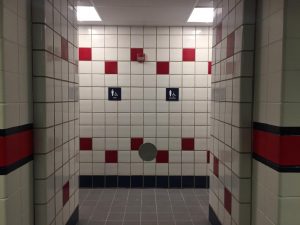 The single-stall bathrooms in the main hallway provide privacy for students.

Additionally, some of the men’s and women’s bathrooms have swapped positions. The new layout depended on the space restrictions. Langer said, “It just worked out better with the existing space restrictions to switch them.”

As for the experience of using the new bathrooms, Britney Maldonado, ‘20, and Gianna Catania, ‘20, enjoyed the privacy of the stalls. “There were so many gaps before and I would be trying to hide myself,” Catania said.

Maldonado added, “They close all the way so there’s no peeking or feeling uncomfortable.”

The appearance of the renovated bathrooms has improved, according to math teacher Jason Franco. “I feel like it’s just a bit more brighter and cleaner-looking, not that it was dirty before, but just dated,” he said. 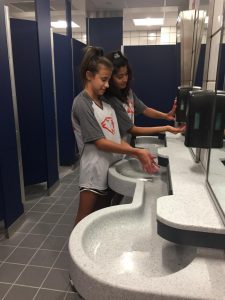 Britney Maldonado, ‘20 and Gianna Catania, ‘20 wash their hands in the new bathroom

The majority of the bathroom construction was completed a few weeks ago, with a few finishing touches made early last week. “For the most part, I would say construction went pretty smoothly this summer,” Langer said. “There weren’t any major hiccups.”