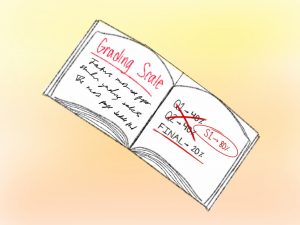 The District 211 joint committee, comprised of the principal, assistant principal, and two teachers from each of the five District 211 schools, have made the decision to change the way a semester grade is calculated. Starting next school year, the traditional quarter system will be replaced with a semester system, making the semester worth 80 percent of students’ grades instead of being divided into two quarters each worth 40 percent. Final exam grades will still be worth 20 percent.

Conant’s joint committee representatives, Principal Julie Nowak, Blue Team Assistant Principal Mark Langer, Dean of Students Derek Fivelson, and Spanish Teacher Brian Drenth, helped the district-wide committee to arrive at a decision after over a year of research and consideration. Fivelson said, “On the committee, there were different sub-committees consisting of different areas of research on grading. We arrived at the decision through much discussion looking at pros and cons of the switch.”

Additionally, 87 percent of teachers across the district voted in favor of the shift, which ultimately finalized the decision.

The main motivation for the switch is to more accurately reflect the fluidity of the learning process and provide more academic opportunities for students. Nowak said, “Sometimes the grades don’t reflect that learning is a continuous process. Giving students a longer time period helps them improve their understanding and their grades.”

Drenth also explained how there is often an unequal distribution of assignments and assessments per quarter, therefore skewing the overall grade students receive. He said, “[A quarter system] can not accurately portray grades mathematically because a lot of teachers don’t give the same amount of tests and quizzes all quarters. That’s usually not how the curriculum goes.”

Nowak believes this new system will help students “not only learn the material, but retain it.”

With the removal of quarters, new reporting deadlines have been set in place to make sure grades are updated periodically. Langer said, “Every six weeks, students will get an in-progress grade, similar to a midterm.” This report is meant to allow students and their parents to be aware of their grades and to hold teachers accountable for grading on time within this new system.

Currently, E319 English classes use the 80-20 system that is going to be implemented district-wide. Nowak said, “E319’s grading system worked out really well. Students are engaged in more meaningful ways, and it doesn’t rush teachers, allowing them to pursue longer-term projects.”

Junior Melanie May also reflected positively on the English grading scale. She said, “I really like the 80/20 grading scale in English because it makes things a lot less stressful and reassures me about the stability of my grade.”