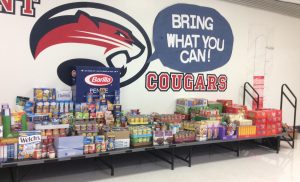 The food collected as of Friday

For the first time in history, many groups throughout the school have contributed donations and efforts for the Cougars Care month, a successful attempt to raise money for veterans and collect donations for the food pantry.

To kick off Cougars Care month, Conant hosted an all-school assembly on Veterans’ Day and had multiple veterans in the school to speak to students throughout the day about what it’s like to serve in the United States armed forces. “These people should not be forgotten,” said social studies teacher Frank Kernats, who played a key role in organizing the assembly. “It’s also a bit of a call to action. The high rate of homelessness and the high suicide rate among recent veterans is national shame, and it’s something that needs to be addressed.”

The Social Studies classes, with the support of Political Club, collected toiletries and other items to aid homeless veterans. Additionally, the groups collected change in the student and teacher cafeterias. This money will be donated to homeless veterans in the community. Before the event, Student Council offered to match the donation if the student body raised $300. The group is still collecting money.

From Nov. 14-18, Student Council collected food and socks from students’ second hour classes to support the Blessings in a Backpack program, which is carried out through Conant’s food pantry. The donations were placed on a stage in the cafeteria along with a donation thermometer to keep students motivated by showing the progress they had made. Student Council provided curbside pickup in the mornings at Door 5 from Nov. 16-18 to help encourage people to donate. About 5,100 items were collected, surpassing the goal of 5,000 items.

Moravek said, “The food was donated to a good cause and helped to directly support Conant’s families and the community in time to help make their holidays a little better.”

The hall monitors brought in the most food overall with a total of 948 items. English teacher Asra Syed was the winner amongst the teachers with a total donation of 640 items. Special education and English teacher Lutz came in second with 562 items, and social studies teacher and Student Council Advisor David Moravek came in third with 439 items. These totals don’t include the items donated in the WINGS drive.

Student Council also held a drive for sides to Thanksgiving meals such as mashed potatoes or cranberry sauce from Nov. 1-15. The food was donated to families in the WINGS charity organization. Thirty-six families were adopted, each by a different class, sport, or club that signed up to participate in the drive. Over 800 items were donated, and the food was delivered in time for the Thanksgiving holiday.

Earlier, on Nov. 5, NHS held a garage sale in order to raise money for Syrian refugees, and surplus items were donated to Goodwill and to veterans in the community. For more information on the garage sale click here.