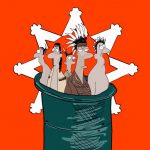 It’s 2017–a world of hover boards, self-driving cars, and waterproof phones. One would think that obtaining basic necessities, such as food and water, wouldn’t be a big problem, at least not in the United States. Well that’s not the case.

Lately, President Trump has signed many executive orders. The one he signed on January 24 allowed companies to resume work on the Dakota Access Pipeline, which will be very detrimental to the Sioux tribe and many other Native Americans.The neglect of the Native American culture and reservation–along with the disregard of the health of the Sioux tribe–is absurd, and the pipeline should not take priority.

Last year, a project to build the Dakota Access Pipeline in North Dakota to connect existing oil transport pipelines to the East was approved. The pipeline would go through the Standing Rock Reservation of the Sioux Tribe, destroying sacred parts of Native culture, and and right under the Missouri River, where the tribe gets their water supply. The pipeline would risk contaminating their water supply if continued.

By September 3, 2016, some of the construction workers had already illegally bulldozed through sacred sites of the Sioux tribe, breaking the treaty signed by United States government and the Sioux tribe. Protests in brutal environmental conditions went on for months, and continued protests meant suffering, like mistreatment by the Morton County Sheriff’s Department, who used attack dogs, tear gas canisters, and sprayed with water cannons in cold weather conditions.

On December 4, around 2,000 veterans flew in from all over the country and formed a “human shield” in front of the protesters. As a result of the human shield, the Army Corps of Engineers temporarily halted the pipeline construction the next day. Though it was temporary, the Natives and the protesters rejoiced that they would be able to have clean water for their community.

Unfortunately for the Sioux tribe, the battle had to continue, as a new president meant a new agenda. President Trump’s executive order now threatens the tribe again.

I believe the constructing of the Dakota Access Pipeline is unjust because the health of Americans should be priority, and providing Americans with food and water should be a basic right. Charities ask for so many donations to help people suffering outside of the United States, but we often forget the suffering inside the United States. The Native Americans have a long history of mistreatment by the United States, and the fact that they will not have clean water just so investors can make quick cash is not right.

We use water for everything, whether it’s for drinking, in our food, washing our clothes, or watering our plants. We must also remember that there are other ways you can get sick from contaminated water besides consumption. Showering in contaminated water can lead to terrible rashes and skin conditions. Often, if the water is bad enough, it can lead to skin cancer. These diseases and health conditions are easily preventable by stopping the contamination of the water, which can only be done if the construction of the pipeline stops. Clean water should be accessible to everyone. No one should have to suffer through avoidable diseases.

Not only that, but the building of pipelines is detrimental to the environment. The pipeline creates the possibility of unneeded pipeline oil spills in the surrounding environment. An oil spill could destroy farms, wildlife, and drinking water for not only citizens, but also animals. The pipeline could release 101.4 million tonnes of carbon dioxide emissions per year, eventually affecting the climate. Pipelines are also known to explode because they are highly flammable and can potentially harm a large number of people.

There are other alternatives to this pipeline, especially since we have been trying to turn to the use of new types of renewable resources to fuel everyday life. The greed of investors led to them trying to make a pipeline that may be beneficial to the country only for a few years and in fact, will harm the environment even more.

The executive order washes away all the work the Sioux tribe and the protesters had accomplished last year. More people should start protesting because Americans cannot let the people of America go without basic necessities. People have the constitutional right of freedom of assembly, and they should be able to exercise that right to protest the Dakota Access Pipeline, especially when they are protesting for resources vital to life.

We cannot let the suffering of Americans go unnoticed because our own Constitution calls for the “pursuit of happiness.” It is our civic duty to ensure that every resident in America has the resources to survive, and most importantly thrive.

On February 22, Standing Rock protesters were forcefully evacuated from the camp. Yet, the protests around the country still continue, and the fight for water is still going strong. You as a high schooler, can help the fight too. Sign petitions to let your voice be heard. Donate money to Standing Rock to keep the movement going and to support the cause.