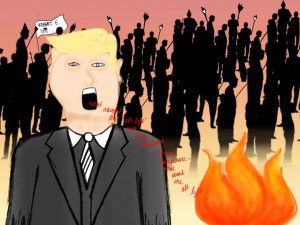 Ever since President Donald Trump’s election, those who support him and those who are against him have thoroughly exercised the freedoms of speech and assembly; however, these liberties have never become as dangerous and disastrous as what occurred in Charlottesville and Trump’s weak response after the incident.

The Charlottesville protest has been described as “one of the largest white supremacist events in recent United States history.” It started on Aug. 12, when white supremacist and neo-Nazi groups gathered in Charlottesville, VA to protest the removal of the statue of Confederate General Robert E. Lee. These groups clashed with anti-racism demonstrators, and at 11:28 am, 20-year-old James Alex Fields Jr. rammed a car into the anti-racist protestors, killing a woman and injuring 19 others. Most people wholeheartedly condemn such horrible actions, but Trump’s inappropriate speech following the attack condones and normalizes these abhorrent behaviors.

Trump’s words are a series of mixed messages, but one thing about them is very clear: he has been unable to condemn the neo-Nazi terror groups. Instead, the president has said, “I think there is blame on both sides.”

It’s inexcusable how the leader of the United States, a nation known for its diversity, acceptance, and freedom, is unable to take a side on such a blatantly racist issue. It was absolutely necessary for Trump to say the Nazis’ actions were repulsive, because without his condemnation, these groups hear the President’s words as an approval. This will continue to cause this country to grow more polarized and divided.

This issue has become even worse with the recent events in Phoenix, where Trump spoke again about what occurred in Virginia. In this speech, Trump again attacked the media for supposedly taking advantage of the attack to make him look bad.

First he attacked the “New York Times”: “If you’re reading a story about somebody, you don’t know. You assume it’s honest, because it’s like the failing ‘New York Times,’ which is like so bad. It’s so bad.”

And then he continued his rant with CNN and ABC: “I mean, CNN is really bad, but ABC this morning — I don’t watch it much, but I’m watching in the morning, and they have little George Stephanopoulos talking to Nikki Haley, right? Little George.”

When he should’ve been talking about the Charlottesville victims, Trump chose to take more cheap shots at the media. This was wrong of him.

We have a president who believes he is the center of everything, is paranoid about his media image, and bullies the press constantly. These actions are disrespectful and make him irresponsible. This seriously makes us doubt Trump’s temperament. However, his words are even more impactful on his followers, who now, according to a recent Fox News poll, believe that the media is more of a threat to this nation than the white supremacists. The same poll also showed that many Americans think that Trump is “tearing this country apart,” making it important that all U.S. citizens get more involved in government by electing less inflammatory leaders.

A time like this is crucial for Conant students to get involved in government. Even though they are a year away, midterm elections are rapidly approaching. These elections are held in November 2018 for senators, congresspeople, and governors. It is of the utmost importance that students who are of voting age become educated on the candidates and vote for the right person to represent them. If we choose people that believe in acceptance, freedom, and democracy, then we will be able to better control the actions of our hot-headed President.

A convenient way to start involvement is the political fair next Thursday, Sept. 14, at Conant in room 211 at 7:30 a.m., where Democratic and Republican representatives from Illinois will be available to talk to students. Students can volunteer and help these candidates with their campaigns, which can serve as LCAP hours and an educational opportunity for future voters. Further questions about the fair can be directed to Frank Kernats in the social studies department.

The Crier strongly believes that Trump is in the wrong with his speeches on Charlottesville, and we hope that in the future he is able to unite this country against racism, bigotry, and intolerance. But no matter what happens with President Trump, we urge young voters to get involved and elect representatives who uphold U.S. values.