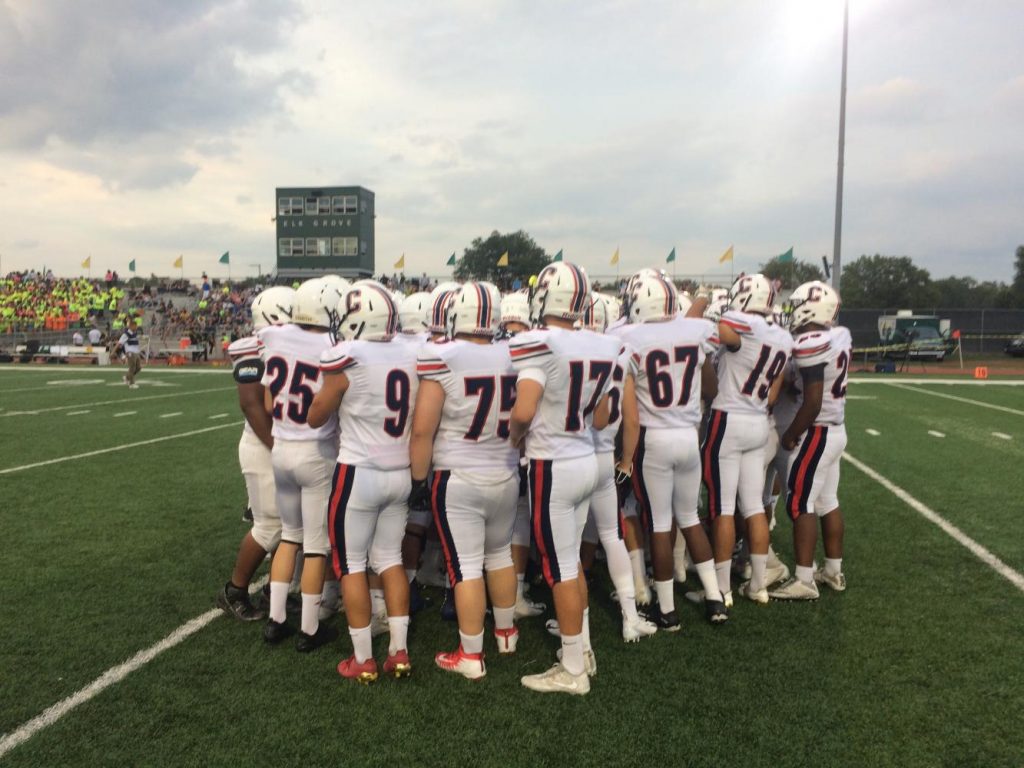 Before Friday’s game at Elk Grove, the football team huddles up during their pregame warm-up.

Even though the Cougars committed two turnovers in the first half, they still led 6-3 against the Elk Grove Grenadiers at halftime. The Cougars were able to distance themselves from the Grenadiers in the third quarter by scoring 20 points, which led to a 33-10 win and their second win of the season.

The Grenadiers started the second half with the ball, but their drive stalled and they punted. Running back Devon Holmes, ‘19, then capped off the Cougars’ first drive of the half with a 25-yard rushing touchdown with under eight minutes to go in the quarter. The Cougars then scored with over three minutes to go on their only pass attempt of the night when quarterback Kevin Polaski, ‘19, threw a 21-yard pass in the end zone for a TD to running back Anthony Wachal, ‘19.

With about 30 seconds to go in the quarter, Polaski rushed in a 23-yard TD.

On the improvement from the first half to the second half, head coach Bryan Stortz said, “We were able to finish drives offensively. Field position was in our favor in the second half a little bit more as well. In the first half, we turned the ball over — we muffed a punt, and we put ourselves in bad positions and we can’t do that.”

Friday night showcased a new major contributor to the Cougars’ offense. Holmes ran for 123 yards and a TD.

“Devon has had an incredible offseason,” Stortz said. Holmes transferred to the Cougars from Bartlett last year, and Stortz said that the coaching staff has complete faith in him.

Holmes said, “I give all props to my O-line. I told them, ‘If you guys block for me, I’m going to do my job,’ and that’s what they did. I told them ‘thank you’ every time.”

Captain Filippo DeFrenza, ‘19, said, “We are going to need to work on our ball security this week, and we need to make sure we’re finishing drives for sure. [We] can’t be driving halfway down the field and not finish in the last 10.”

Stortz said, “I think, watching our kids, they are playing hard. Sometimes when you are playing hard, you are not playing within yourself. We got to learn how to be more under control and be able to clean up some of those things.”

The Cougars finish their three-game road trip this Friday against Evanston.