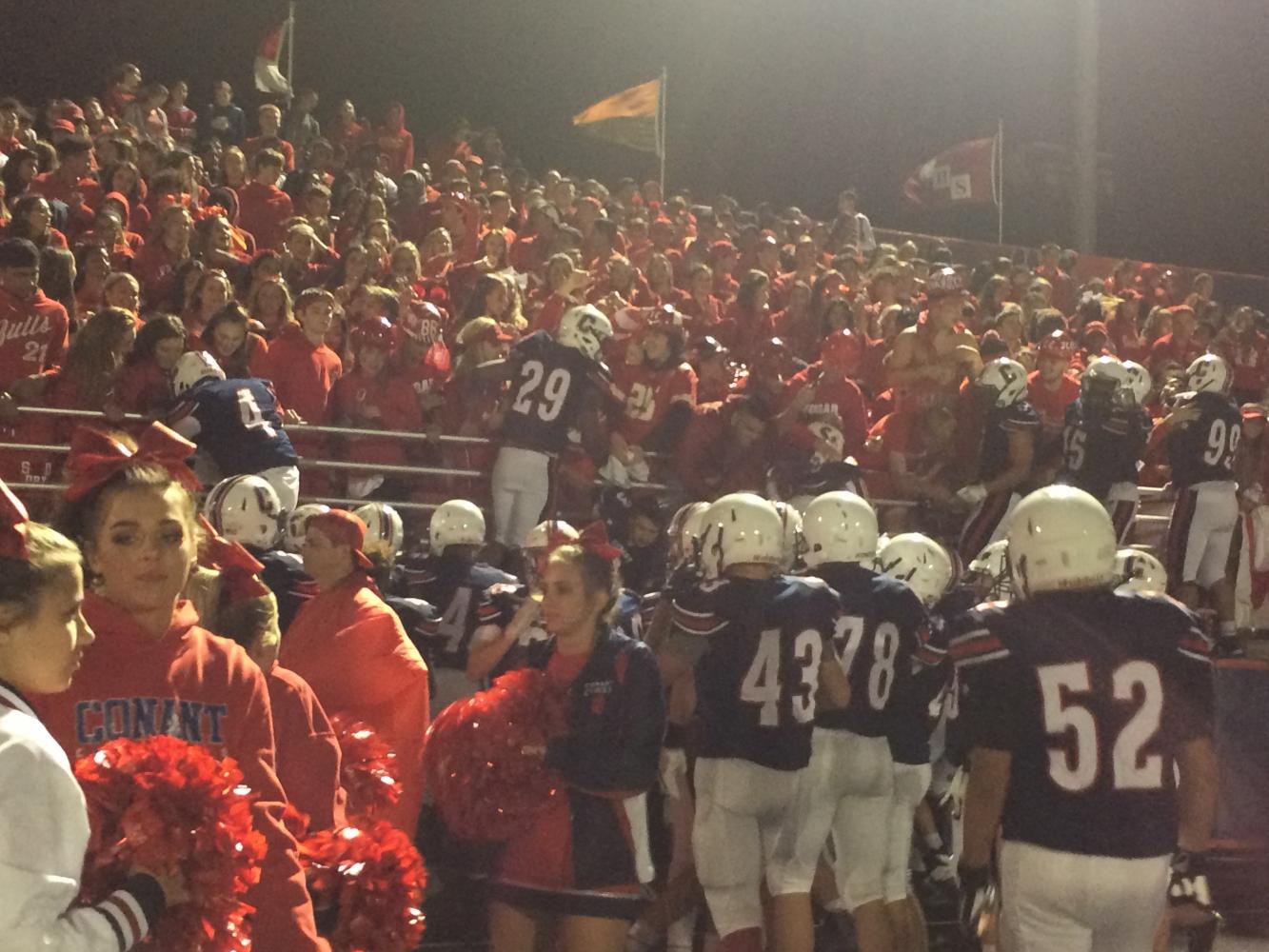 After winning their first division game in three seasons, the football team celebrates with the Cougar Crazies.

Just one week after losing at home by 28 points, the Cougars went right back on their home turf for their first MSL West Division game of the season and defeated the Barrington Broncos 21-12 on Friday. This is the first time the Cougars have beaten the Broncos since 2012.

While the Cougars had a 14-12 lead coming out of halftime, the Broncos got the ball to start the second half and were driving down the field until defensive back Ryan Schar, ‘19, made an interception on the Cougar 24-yard line with 8:31 to go in third quarter.

The Cougars held onto the ball for over nine consecutive minutes until captain and quarterback Kevin Polaski, ‘19, scored a 6-yard rushing TD.

Head coach Bryan Stortz said about the drive, “I think the offensive line did a great job. Kevin made a lot of great decisions.”

The Broncos did not let the long possession deter them, as they drove down to the Cougar 9-yard line and faced a fourth-and-4. A poorly thrown pass by Broncos quarterback Tommy Fitzpatrick, ‘20, went incomplete, and the Cougars took over on downs. The Cougars were unable to run out the entire clock and gave the ball back to the Broncos with under 30 seconds to go. The Broncos could not mount a comeback in that time.

Besides being able to win the time of possession battle in the second half, the team also impressed Stortz because they didn’t make any turnovers and eliminated Fitzpatrick as much as they could.

The Cougars scored two TDs in the second quarter. The first was a 1-yard rushing TD by running back Bradley Spates, ‘20, with 7:41 to go in the quarter and the other was a 5-yard passing TD from Polaski to captain and wide receiver Anthony Wachal, ‘19, with about 10 seconds to go in the quarter.

This win is significant for the Cougars, as it moves them to 3-2 for the season.

Defensive lineman Frank Daidone, ‘19, said, [This game] shows who we are as team, our identity, that we are not afraid to back down from anything..”

Before their next game at Schaumburg this Friday, the Cougars still need to improve in some areas. Wachal said that he, who also plays defensive back, and the defense need to better job of reading plays and that he and the offense need to stay on their blocks.