Boys soccer heads into second half of season with winning record 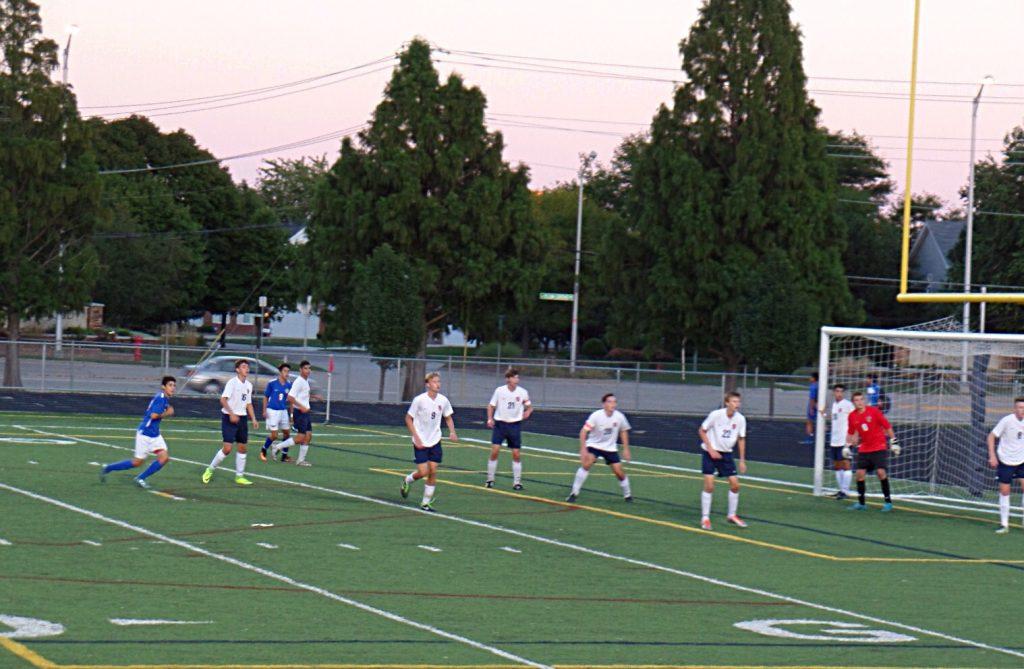 The defense prepares for a Hoffman corner kick.

The boys varsity soccer team heads into the middle of their conference schedule with an 8-4 record and big wins behind them over Schaumburg and Hoffman. However, there is no slowing down from here.

With big games coming up against Fremd and Barrington, who are first in the West, the pressure is on. Assistant Coach Tim Harte said the team knows the games are important and is handling the pressure well.

In order to place well in Conference, “We gotta go into every game expecting to get a result,” Head Coach Jason Franco said.

The goals for the team right now are winning the conference championship and winning a regional championship. In order to do so, they have been focusing on “team chemistry, leadership,” Harte said, “and creating a positive vibe.”

It is important that the team lifts each other up rather than pulling each other down after making a mistake. Franco said they have had to break some of the guys’ habits of negatively talking to one another.

As the season has progressed, the players have also noticed their playing style and comfort with each other needs improving before heading into these big games down the road.  “We can always play simpler,” Captain Kevin Sindewald, ‘17 said.

Franco and Harte have been creating many drills in practice to emphasize how the guys should play and to make it carry over to the game. We are “trying to develop, for the guys, a better understanding of what their role is and where they’re supposed to be and how they should move,” Harte said.

The first game and win this season was against New Trier. “That was one of our best games,” Sindewald said. “We’re trying to find that a little bit again.” With clinching goals from Sota Uno, ‘19, and Noah Ozbag, ‘17, the Cougars defeated the Trevians, exciting everyone for the season ahead.

Coming into the season, no one knew what to expect from the team. There was no goalie at the start of the season. Piotr Pyz, the sophomore starting goalie, came from Poland this year and has been doing well. Harte, who is also the goalie coach, said that Pyz has brought a new vision of the game, coming from a different country.

Also, Tim Breiter, ‘17,  took his junior year off of soccer to focus on his volleyball but decided to come back for his senior season. Harte said of Breiter trying to get his skills back,  “He’s been working hard, which is actually good for the guys to see because he’s really working hard to make himself better.”

Additionally, there were only a few returning varsity starters. But, Franco said many younger players were prepared for the transition into varsity and have fit in well. He said of the four new starters , “They are all pretty talented players…so it wasn’t a hard jump for them.” Even the ones that don’t get as much playing time, Sindewald said, are doing their part to help the team by cheering them on and hyping them up.