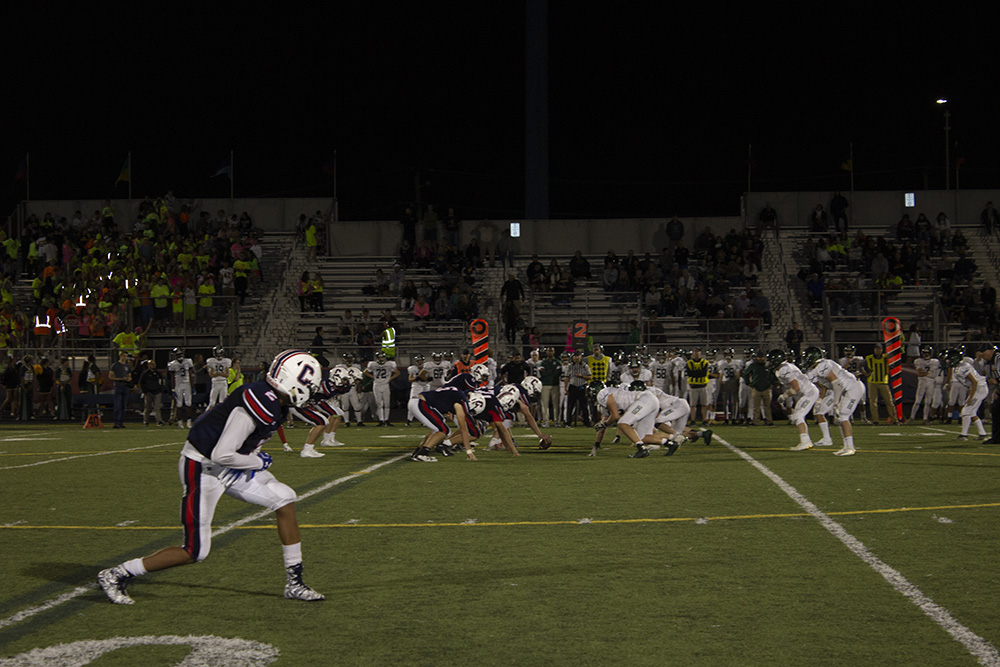 In this file photo, Conant lines up against Elk Grove on Sept. 6.

Led by a strong running game and a dominant defense, the Cougars beat the Hoffman Hawks for the opening game of conference play.

The Cougars lost to the Hawks last year by just two points.

“It was a tough loss last year that we knew we should’ve won,” Malik Frederick, ‘21 said. “It was big for us to win and shows what we are capable of.”

Frederick’s 6-yard touchdown run put the Cougars up 7-0 early in the first quarter. He rushed 29 times for 139 yards and two touchdowns in the win.

On the defensive end, Marktwain Green, ‘20, intercepted the ball late in the first quarter, which stopped the Hawks from a potential touchdown.

Another interception at the Hawks’ 19-yard line by captain Jeremy Betancourt, ‘20, set up a Frederick 17-yard touchdown run that extended the lead by 14 points in the second quarter.

“Defensively we were able to make big plays and keep them off the field,” head coach Bryan Stortz said. “Turnovers were a big part.”

Safety Matthew Botello, ‘20, also had an interception. “The defense was able to hold Hoffman’s offense from scoring,” middle linebacker Aaron Drawer, ’21, said. We won the turn over ratio, which helped give us momentum.”

Despite the Cougars having a dominant defense, their offense took up most of the game. The Conant offense used 10:17 of the third quarter. “Our offense obviously takes care of the ball,” Stortz said. “We converted more on fourth downs, which was huge in tonight’s game.”

Quarterback Giuseppe Dugo, ’22, also ran for an 11-yard touchdown. “The offensive line has been doing amazing,” Dugo said. They aren’t allowing any defensive linemen getting through which allows me to score.”

Shortly after Dugo’s touchdown, Hoffman’s Jashawn Johnson ran for 93-yards off the kick return. It was the only score of the night for Hoffman. “To be honest defense didn’t even let up any points,” Betancourt said. It was our special teams that let up something, so we have to work on that.”

“This win has shown progress in our program from the previous two years,”Stortz said. ”The kids who have been here for three to four years have been able to see the work that they have put in and what it means to be successful.”

Conant will play Barrington on Saturday, October 5 for Barrington’s Homecoming game. Kickoff is at 1pm.

Tina is a Senior at Conant, and this is her first year as a sports writer for the Conant Crier. She has played volleyball & lacrosse, and is also a member of the Cougar Crazies. Outside of school Tina loves to watch and read about sports. She also loves traveling with her family and friends.