In 2016, Palmer Graham, ‘16, made a name for himself on the Alabama State football team as a true freshman by catching 11 passes for 151 yards and scoring a pair of touchdowns. In 2017, Graham was the Hornets punt returner, as he returned 20 of the team’s 21 attempts for 86 yards. 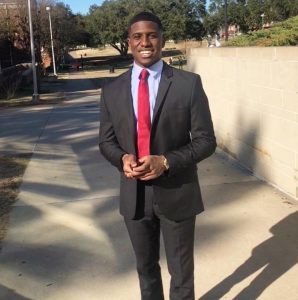 For this upcoming season, Palmer Graham seeks to be a threat on offense and special teams.

For his junior season, Graham said he seeks to have a combination of his first two seasons so he can he be a threat in multiple phases of the game.

“I expected my two seasons to go as they did,” Graham said. In his freshman season, he scored his first TD as a wide receiver in his first collegiate game against the University of Texas at San Antonio in the Alamodome. As a sophomore, however, the Hornets were not a passing team, so Graham became primarily a punt returner along with returning three kickoffs.

Last season, Graham had just one catch but made the most of it as he scored an 8-yard touchdown against Texas Southern.

Regardless of where he is played, Graham said, “My role for the next couple of years is to spark the team, to continue to make plays when the ball comes to me, and really every time I get the opportunity to make the most of it and take advantage of it, and push my team to victory to win as many games as possible.”

As for academics, Graham said he’s had a great experience so far. “My academics in college are better than they ever were in high school. In high school I had a 3.0. Right now I’m sitting at a 3.6. Last semester I had a 4.0,” Graham said, who is currently majoring in computer information systems and minoring in finance.

This summer Graham is interning for the metal and glass packaging company Ardagh Group in Chicago for their human resources and finance departments, and hopes to after he graduates to become a salesman or a general manager for an information systems company.

Fans in the Conant area can watch Graham play on TV on Sept. 8 as his Hornets take on Auburn at 6:30 p.m. on the SEC Network Alternate channel.