Not getting the offers he wanted out of high school, Tyler LaBarbera, ‘15, tooked a delayed route to being an FBS football player. The decision has payed off for him so far, as his successful career at the College of DuPage (COD) led him to a spot on Eastern Michigan University (EMU) in January 2017. Now an established part of EMU’s defense, LaBarbera looks to have his best year yet in his final year of college football.

The decision to go to junior college 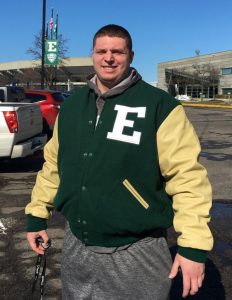 After spending two seasons at the Collge of DuPage and one at Eastern Michigan, Tyler LaBarbera, ‘15, looks to have a strong senior season.

LaBarbera had a successful football career at Conant as a team captain for two years, named first team all-conference, all-area, and an honorable mention on the all-state team during his senior year. However, when it came to recruiting, colleges weren’t as interested in his skills as his resume might suggest.

“My coaches worked very hard to get me recruited, but Conant really honestly didn’t get that recruiting attention as far as having big interest with Division I schools and so forth,” LaBarbera said. During the recruiting process, LaBarbera attended camps and combines where he was able to meet college coaches. When LaBarbera attended those events, the coaches he met often had never visited Conant before.

Unable to receive an FBS scholarship out of high school, LaBarbera went to COD to continue his football career with the hopes that after two seasons.

At COD, LaBarbera was able to work towards his goal because COD runs their program like a Division I program. LaBarbera said, “I like to tell people that it’s almost like Division I without all the benefits.” LaBarbera added that it’s a very high level football program that not all Division I coaches are aware about. “It’s mostly a lot of guys who didn’t necessarily make the grades, or they’re underecruited,” LaBarbera said.

LaBarbera succeeded both on and off the field at COD as a defensive tackle. In his freshman year, COD finished the season ranked fourth in the National Junior Collegiate Athletic Association. In his final game of the year, the El Toro Bowl, LaBarbera was named defensive MVP of the game.

During his sophomore season, LaBarbera was a team captain who led his team to a Red Grange Bowl victory. “It’s awesome to have your fellow teammates nominate you for that,” LaBarbera said, who added that having players go to him for motivation and share similar experiences with them made the role awesome.

Off the field, LaBarbera was a part of the Champions Club at COD, which admits members with a 3.0 GPA or higher. LaBarbera, who was a part of the  National Honor Society at Conant, maintained a 4.0 GPA during his time at COD. With his two years of his college football eligibility completed, LaBarbera finally had an offer from an FBS school.

In the fall of his sophomore season, LaBarbera was offered a football scholarship by EMU that would start in January 2017 and decided to go there over offers Fordham and South Dakota.

LaBarbera committed to the school in December 2016, and on Jan. 2, 2017, he was already working out with his new team. The fast transition meant LaBarbera had to learn the names of his teammates in his weightlifting, training, and running groups and had to adapt to the team’s environment as soon as the training started.

In LaBarbera’s first FBS game, EMU visited Rutgers, a Big Ten team with a stadium holding 52,454 seats. “You walk out, you’re away, and you’re playing another team. It might sound weird but I really enjoyed it because it’s like you against the world. It’s an awesome experience with the adrenalin, and being able to overcome it is an out of this world type of experience to play in front of a crowd like that,” LaBarbera said.

LaBarbera said his best game was his last of the season, which was against Bowling Green. “I had a deflected pass, I was hurrying the passer, I really picked up and excelled in the last game,” LaBarbera said, who added that he felt in control throughout the game.

At the end of the season, LaBarbera won the Gridiron Group Defensive Newcomer Award as voted on by his coaches. “It’s a great honor to have as far as notoriety. It’s just something that humbles me and I was thankful for it. But I know I got more work to do. I want to keep getting better and better every day and make my dreams a reality.”

For this upcoming season, LaBarbera said his goals are to gain Mid-American Conference recognition and to improve his productivity by making more tackles and stopping the run game. LaBarbera’s big goal now is to be drafted and play in the NFL, and believes the goals he has this season will help pave the path for that.

As a team player, LaBarbera is looking to contribute to the improvement of a 5-7 record that included six losses coming by seven points or fewer. One of the team’s losses last year came against Army when they failed to convert a two-point conversion in the final minute of the game, which led to a 28-27 loss.

LaBarbera said the two-point conversion was short by four inches. Therefore, the team is working on the little things, such as touching the line in conditioning after running 100 yards. “We feel like those little things that can be annoying at certain times but make a lot of difference in a really close game,” LaBarbera said.

Besides taking football seriously, LaBarbera is also taking his academics seriously, earning close to a 3.5 GPA at his time at EMU. “I’ve always been interested in a sports medicine type field, like physical therapy. I enjoy being able to make an impact on people,” LaBarbera said.

When he was at COD, LaBarbera and the football team used to participate in activities with kids and adults who were participants in Special Olympics. Those activities have put a lasting impact on LaBarbera.

“The amount of impact you can make on someone’s life one day a week, giving an hour of your time, is truly amazing. Imagine if you do that for an entire career, whether it’s training, whether it’s P.T., helping them after a surgery, being a doctor and sitting down with somebody and giving them the kind of day that other people wouldn’t. It’s just a very humbling, emotional, rewarding experience,” LaBarbera said.