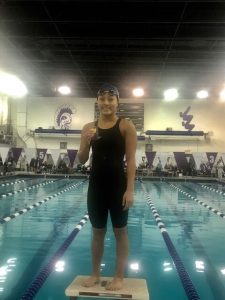 Megumi Komoto places 5th for the 100-yard butterfly at sectionals.

“She eventually set it over a second faster than it was by the previous holder Allison Cicero in 2014,” Justin Bickus, the varsity swim coach, said.

Komoto said she remembered the day of her record breaking race well.

“During the race, I felt really tired, but I pushed through because my teammates were at the other end cheering for me,” Komoto stated.

“I was super surprised because I was still very tired from the 200 IM, so I was really nervous during the race,” Komoto said.

“Megumi embodies what I like most about any swimmer,” Bickus said, “She works hard and loves to race and compete.”

Bickus said that Komoto leads by example by pushing herself, working hard, and being there for her teammates.

Wartman said she believes Komoto always brings her dedication and positive attitude to practices and meets.

Bickus said, “I love the fight she has for any race. She has the ability to persevere through a race and will herself to a good finish.”

Komoto started swimming competitively for the YMCA team, and when she was nine years old, she moved to the Academy Bullets team.

“My parents actually put me into swimming because I broke my arm three times in gymnastics,” Komoto said. “My parents wanted me to be in a safer sport.”

She added that she didn’t like her parents’ decision in the beginning. Komoto said, “I hated swimming at first, but as I kept swimming and got better at it, I learned to enjoy it.”

When Komoto started out, the backstroke was her favorite, but she was better at butterfly. After taking her Academy Bullets coach’s advice to focus on the butterfly, Komoto placed at the Illinois Age Group State Championship for the 200-meter butterfly in the summer of 2017.

With three seasons left at Conant for Komoto, Bickus hopes to help her realize her potential and help her grow as both a swimmer and competitor.

Wartman said she hopes to encourage Komoto and help her lower the record time.

“I plan to swim for Conant for the next three years and my biggest goal for the next season would be to make it to state for the 100 yard butterfly,” Komoto said.