Do teachers really get better food than students?

Allison Pariso, ‘18; Dylan Toth, ‘18; Michelle Zhang, ‘19; Nikita Basu, ‘19; and Archisha Ghosh, ‘19, are student cafeteria regulars, and they participated in the lunch swap, which took place during sixth period. They purchased and ate their food in the teachers’ cafe, and they said they were pleasantly surprised by the taste differences between both cafes. 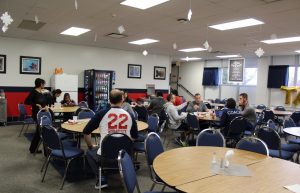 The inside of the teacher cafeteria.

Crier: What did you eat both days, and how did the food taste?

Zhang: I wanted to try something new, so I had the teacher special both days. The first day the Italian sausage with potatoes. The second day I had the vegetable lasagna and roasted cauliflowers. On average, the taste was about the same; however, the specials were definitely better than the food in the student cafeteria. I felt like the lasagna tasted the best, and it would be a good option for vegetarians.

Basu: I ate a Turkey Panini the first day and lasagna the second day. I normally try to eat what I’m comfortable with, which is why I tend to lean towards the student options. The food tasted the same.

Crier: Did the food you ate look like what you usually eat the student cafeteria?

Pariso:  The food looked different. It was warm and also looked more like an entree I would order at a restaurant rather than cafeteria food.

Toth: I thought the food looked identical because I didn’t order a special. In fact, the cafeteria worker went to the student cafeteria to get the food.

Zhang: There were many options that were identical to the student cafeteria; however, there were other options, such as the specials, that looked a lot more appealing. That’s why I had the teacher special both days

Ghosh: On the first day, it did look like it was from the student cafeteria, but the food on the second day looked completely different.

Pariso:  It was definitely different than eating in the student cafeteria. It was smaller and much quieter. The seats were more comfortable and the tables were round instead of rectangular. … The cafeteria workers were also nice to us, but often had to ask their bosses to make sure they could serve us the food because the specials were supposed to be only given to the teachers. The same problem applied to payment.

Toth: The cafeteria workers treated us pretty much the same as they would in the student cafeteria. They were very nice, of course, as they all know how to treat students and teachers alike.

Basu: It was quieter. The cafeteria workers did not like letting us purchase food from the teacher cafeteria. The other teachers gave us some strange looks but ignored us otherwise.

Ghosh: Eating in the teacher cafeteria is a lot quieter and lonelier. The cafeteria workers were polite and accommodating, and the teachers left us alone for the most part. 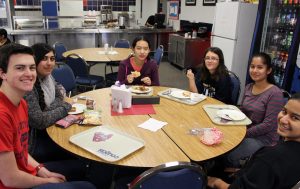 The students finish up lunch.

Crier: Did the teacher cafeteria have more options than the student cafeteria?

Pariso: The teacher cafe had specials, which the student one doesn’t have, and more options for snacks and drinks. However, most of the choices were similar, if not the same, as those in the student cafeteria.

Zhang: I am not sure about more options, but they definitely had some better and fancier options.

Basu: The teacher cafeteria offered everything that the students received and more specialities.

History teacher Denise Mitchell, P.E. teachers John Powers and David Cromer, and science teacher David Torpe usually eat in the teacher cafeteria, and they sometimes bring their own food from home. They purchased their food from the student cafe for three days, but they ate in different locations. Powers and Cromer took their food back to the teacher cafe, while Mitchell took it to her desk in the social studies office. Torpe, who ate at his desk the first day, bravely ate in the student cafe for the last two days of the swap.

Crier: How did it feel buying food from the student cafeteria? 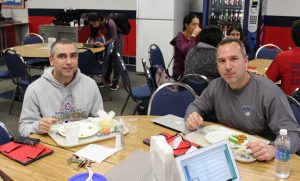 John Powers and David Cromer sat in the teacher cafe, but they ate from the student one.

Mitchell: I went the second half of sixth, so the lines weren’t as long. Since I didn’t have to wait too long, it wasn’t that bad. The cafeteria workers were nice, and I was served right away.

Cromer: I felt like a true freshman. When I walked in, I saw there were so many lines, and I didn’t know which line was getting what. I felt a little bit of anxiety because I didn’t know what the options were. The whiteboards and menus around the doors really helped.

Powers: It felt different. It felt like I was in the way of the students, but once I saw the white boards on the door, everything went much faster. I almost got used to it by the end of the third day.

Torpe: The buying portion was simple, but I relived my Conant High School experience during those three days. I was not very popular in high school, and finding a place to sit in the cafeteria was always a challenge for me. It was a little uncomfortable. On the second day, I decided to sit with my students. They were really nice; one of them I have in my class. It was awkward at first, but it eventually became more comfortable once they saw I was there as one of them, not as a teacher.

Crier: What did you eat during the three days, and how did it taste?

Mitchell: I had the pizza, a burrito, and a sandwich. The options were quite similar to the ones I get from the teachers’ cafe. It tasted exactly the same; however, I will say that the teachers get specials that the students don’t. Those are very good. My personal favorite is the Tilapia. Another difference is that the teachers get sandwiches made fresh, and there is always a unique choice for soup.

Cromer: On the first day, I had a salad, which is what I eat typically every day. But on day two and three, I wanted to go outside my comfort zone. I decided to eat the panini. I got vegetables for my sides. The same people cook for both the teachers and students, so the quality of the food is the same. I think the idea that teachers get better food than the students is incorrect. The cafeteria workers don’t have anything against the students. The main differences are that the teachers get more entrees, and the student menu is held to a government health standard, while ours isn’t.

Powers: I had a salad because I eat one every day. Eating healthy is a big part of my life. I also tried some of the other options such as the pizza they offered. Like Mr. Cromer, I also got vegetable sides. The salad tasted the exact same, very healthy and delicious. The other food tasted very good as well. Overall, I tasted no difference between both cafeterias. 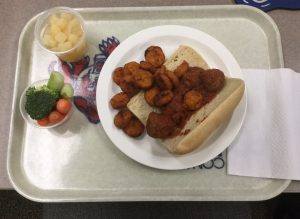 Torpe: On the first day, I had the meatball sub with sweet potato bites. The following days, I ate the panini with vegetable sides. The meatball sandwich brought me back to my days here as a student. I don’t know if it is the same, but it really seems like it has not changed since I was here. I really enjoyed the sandwich as a student and now as a teacher. I think the bread is now wheat bread. The side I chose was the sweet potato “bites”, and they were much, much better than the tater tots that I remember from “old Conant cafeteria.” Also the napkins are way nicer now than years ago.

Overall feelings from students and teachers

“The specials were more expensive. They were four dollars on each day,” Pariso stated. Toth said that compared to four dollars, he pays two dollars and ninety cents for his food everyday.

Cromer explained that students couldn’t have all the options teachers had because of financial constraints. “The entrees are expensive, so students most likely wouldn’t be able to pay for them,” he continued.

He also said the belief that teachers had specials everyday was a myth. In fact, teacher entrees have been cut back from five days a week to three days a week in an effort to meet d211 budget cuts.

“We’re even trying to implement healthier options for teachers,” he said.

Both Powers and Torpe, who attended CHS as students, said they were reminded of their school days during the lunch swap. Powers said a lot of things in the cafeteria today are different than what he had as a CHS student.

“The lines were definitely different,” Powers said. “When I attended high school, we had four distinct lines: the salad line, the a la carte line, the snack line, and one for the entree portion.”

“Lunch was also only a dollar,” he continued, “and for a dollar and ten cents, we got a pizza and a shake on Fridays.”

Torpe felt everything was mostly the same, “The food was basically the same; I remember eating the panini as a student.” 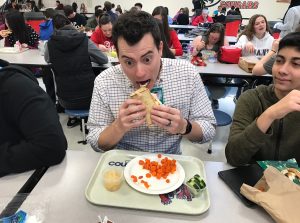 David Torpe eats with his students on the second day.

“I’d rather eat with my friends,” Zhang said. “The student cafeteria is also much cheaper.”

From both the student and teacher testimonies, The Crier learned that the rumors about teachers getting better food isn’t necessarily true. All the food is prepared by the same cafeteria workers, so the quality of the food is pretty much the same.