From Colombia to Conant, recent graduate leaves her mark 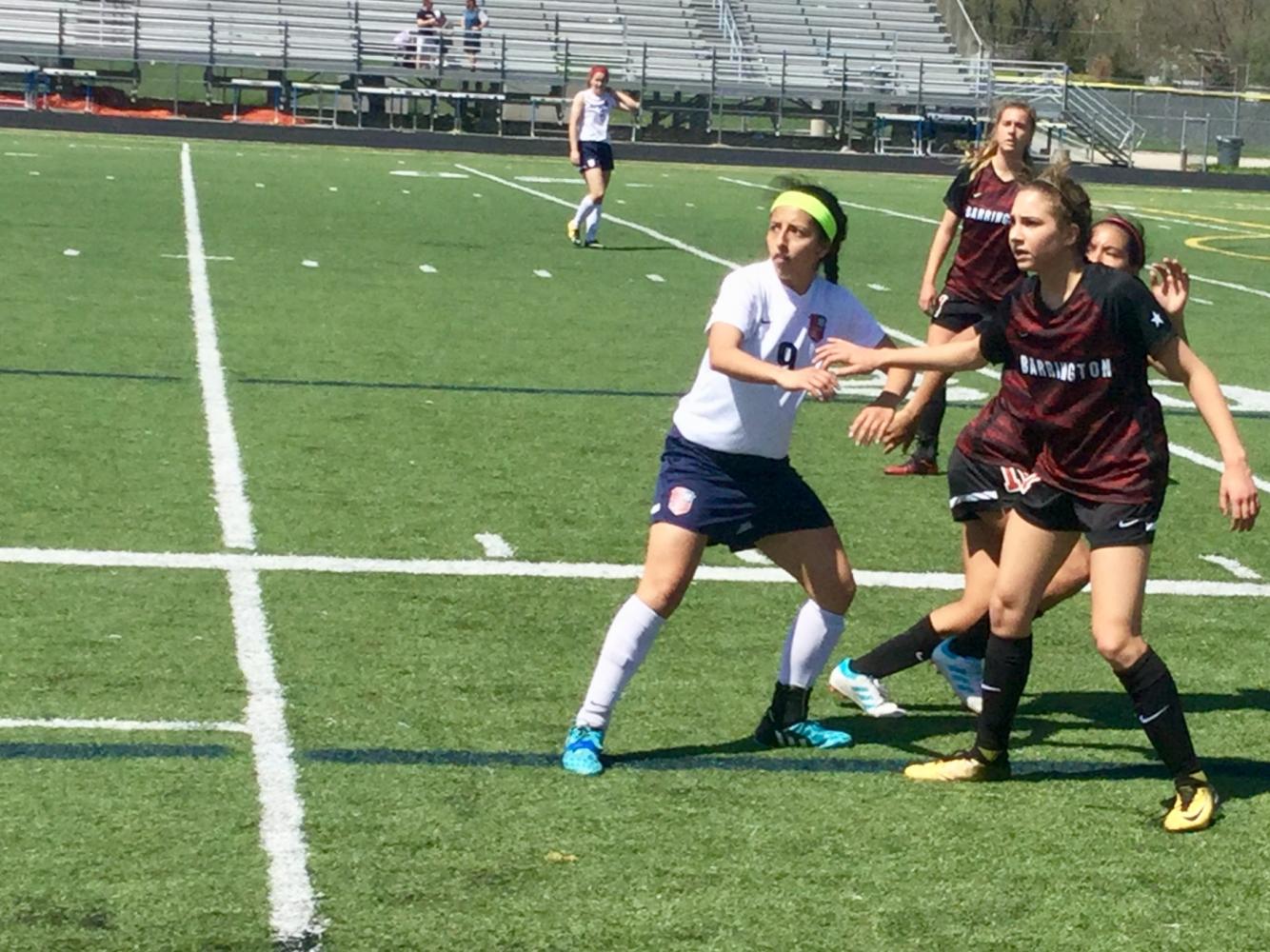 Val Moreno (white jersey) prepares to play the ball in a game against Barrington on May 5.

Moving to the United States during her freshman year, Val Moreno, ‘18, struggled learning the language and getting used to playing soccer in a different country. Yet, thanks to the support and compassion of the Conant community, Moreno adjusted to the culture at Conant and became an integral part of it. During her senior year, Moreno participated in multiple activities, which included being a varsity soccer player and a Co-President of NHS.

Life in Columbia and Costa Rica

Moreno spent the first 14 years of her life in Colombia and the next two years in Costa Rica. She moved to the United States due to her dad, who was born America and moved from Costa Rica due to his career in civil engineering. When she was introduced to soccer when she was five, the sport came easily to her due to her athleticism and her coordination.

In Colombia, soccer is played during all four seasons and is only sponsored by club teams. Moreno said, “You have practice every day and you become pretty good.”

Besides the difference in structure in Colombia, Moreno said the sport is also coached differently. “In Colombia, they don’t actually teach you the basics. It’s just like a free play,” Moreno said. Her success in Colombia was based on her raw skills, which included having good footwork and being able to see plays before they happened. However, the lack of learning the basics formally would later prove to be a challenge to her in the United States.

When Moreno lived in Costa Rica, one of her favorite experiences was going on a one month tour playing multiple sports throughout South America with her school, which was the SEK International Institution. With the school having many centers in the Americas, the schools come together every two years to compete against each other in multiple different countries.

“It was really, really nice. We were in Costa Rica first and then went to Panama. Then we actually played in Paraguay, but then since Paraguay is so close to all these countries, we got to visit Argentina, Brazil, and Chile,” Moreno said.

When Moreno moved to the United States during her freshman year, she had the typical struggle of learning the language, but gained help through the school community. “The people here were really nice. That’s what I love most about this place. They would respect my culture but at the same time they would help me out. They would teach me words I didn’t know; they would help me out whenever I made a grammar mistake. That’s how I became pretty fluent as I am now,” Moreno said.

Moreno said that many of the friends she made during her freshman year are still her friends today.

Besides having to learn another language, Moreno also had to face the challenge of adjusting to the way Americans are coached to play soccer.

“What American society helped me that didn’t translate from my Colombian culture was the whole process of starting from the beginning with normal passing. I was not as good with passing. They never ever told me there in Colombia that it was something I had to do good; I just passed and it was good enough.

“Here you need to be precise; you need to be accurate. But, definitely my skills of being a fast player and doing some moves with the ball helped me a lot out here,” Moreno said.

Besides refining her skills, Moreno also had to take time to learn the rules of the game. Girls freshman coach Mark Davies said, “She would get called for offsides two, three, four times a game and she didn’t know what she was getting whistled for. So, definitely a big learning curve, not just playing wise, but also getting used to the rules and dealing with it. She overcame it, and she didn’t let it bring her down at all.”

Davies added that she was willing to work at the fundamentals of the game during her freshman season, and added that with about one year of experience of player soccer in the United States, Moreno was adjusted to the soccer culture. After a year of being in America, Moreno said she was fully adjusted to the culture at Conant as well.

Now adjusted, Moreno positively gives back to the community

During her junior year, she completed 53 volunteer hours for NHS, which was a reason why she was elected for Co-President for this year. “I love helping out people. It’s a passion for me,” Moreno said.

“You’re not going to find many students that are as passionate about life,” said Jeff Stewart, who was Moreno’s AP American Government and Politics teacher and is also a Co-Sponsor of NHS.

Stewart added that Moreno is a leader by asking questions, even if she doesn’t have solutions for them. “It helps others to think about their own values and how else they can help,” he said, while also pointing out that she has left a positive impact for the organization for years to come, especially on this year’s junior class.

Jessica Smeltzer, ‘19, a participant in soccer and NHS, said, “Val’s leadership in NHS has set the standards very high to how it should be run due to her responsibility and strong leadership.”

Moreno was also a very active participant in her AP American Government and Politics class. “The subject matter is policy-oriented, so she comes to class with the same attitude, very passionate, energetic, wanting to be involved in the conversation, somebody who asks questions in class. That’s what you want out of a real student, so it’s definitely been a pleasure,” Stewart said.

Moreno also made a difference on the field. Girls head varsity soccer coach Jason Franco said, “Her hard work and her feistiness helps her overcome her lack of size as a smaller wing placer. She gets up and down the sideline, she’s very good defensively, she gets herself involved in the game.”

Franco added that she is also a vocal and emotional leader.

Teammate Taylor Cyr, ‘18, said, “It feels like it’s a huge part of her personality just being vocal and loud. We really love that part about Val because it gets us all fired up before the game. She’s the one in the middle of the circle screaming and yelling, so it really benefits our team to have her there, definitely.”

Moreno joined the varsity soccer team during her junior season and had five goals in her senior season. She improved before her senior season when she was not playing with her club team, the Elk Grove Gators, by running as many miles as she could until she was tired enough to go home. “Then I realized that when the season came I was not out of shape, like I was even more than good with being in shape and my endurance. So definitely, the work payed off,” Moreno said.

Moreno plans on majoring in mechanical engineering at Purdue University.