Boys’ volleyball a new and fun experience for players 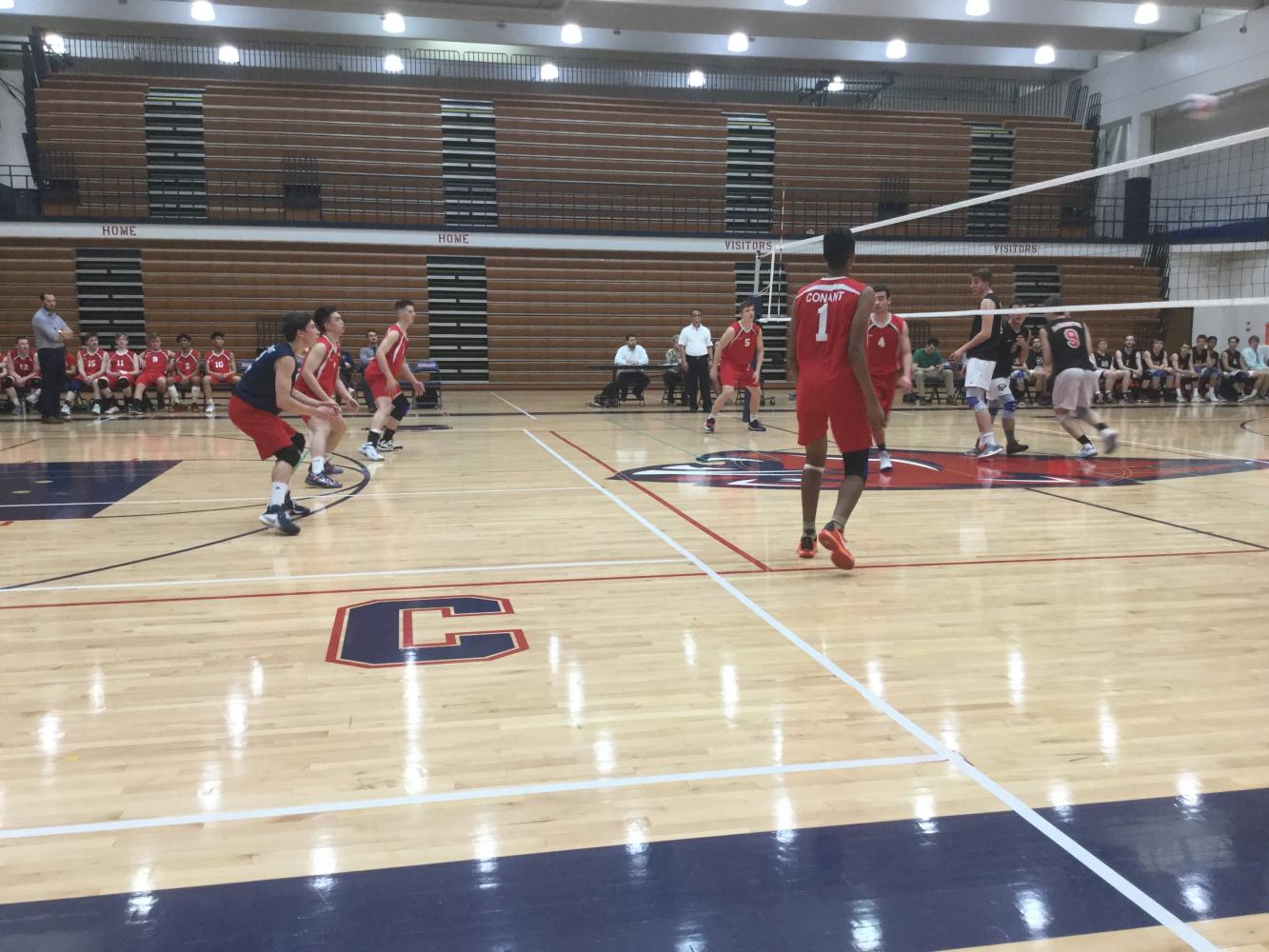 In a game against Barrington on May 3, the boys’ volleyball team set up for an attack.

According to statista.com, nearly eight times as many girls participate in high school volleyball than boys. Additionally, most Conant students come from feeder schools without boys’ volleyball. So with a sport that has a clear female dominance, how is it that boys at Conant end up playing volleyball?

George Tawfic, ‘21, became a Conant volleyball player after playing basketball in the winter. Boys head varsity volleyball coach J.C. Brown had asked Boys freshman basketball coach Austin Sobey if he had anyone on the team he thought would be interested in playing volleyball. “So coach Brown called me down, and he asked me if I wanted to play, and I considered it, tried out, and made the team,” Tawfic said.

He described the experience as fun, while adding that it was a different experience from other sports since not everyone had experience playing.

Brown said that while boys are exposed to playing soccer, basketball, and baseball growing up, they aren’t usually exposed to volleyball until they play it in their P.E. junior high class. “There are club teams, but I think [with] girls it’s popular, and the word is out about playing club.”

Brown added that because the junior highs in the area offer girls volleyball, coaches on those teams often expose their players to high school volleyball, as well as the idea of playing for a club team.

Most boys in the Conant volleyball program don’t hear about playing for a club team until during their freshman year. Out of the 12 boys on the freshman team this year, only one player had club experience before joining the team.

Even without the experience of playing volleyball, boys in the program who have played sports like basketball and soccer do have some of the skills it takes to be successful in volleyball. Tawfic said, “Communication is a huge part in both basketball and volleyball. You can’t work with a team or win a game without communication.”

Brown added that other skills from these sports, like footwork as well as jumping from basketball, help the players, especially for spiking.

When athletes first try out for the program, Brown said they usually possess typical P.E. volleyball skills. “But the nice thing about it is they don’t come in with bad habits. They come in where we can kind of mold them and teach them the right skills because they kind of start at not knowing anything. So we teach them the right way freshman year, and then they build on those skills, getting better and better rather than coming over with some poor habits.”

Once the players get the skills down, they have an enjoyable time playing the sport. Anthony Chan, ‘18, said, “The people are really great. I have good teammates. They always support me.”

Chan also discussed the difference between boys and girls volleyball.

“I don’t know why it’s looked down upon as people think about it as a girl sport, but it’s definitely not. It’s a lot more fast paced with guys, so people would definitely like it if they started playing it.”

Athletes can still join the program after their freshman year, which is what Anthony Wachal, ‘19, did this year. Wachal, who aspires to be a four-year, three-sport athlete, had competed in baseball the past two springs, along with football and basketball in the other seasons. However, knowing that he wasn’t going to move up in the baseball program, he decided to give volleyball a go this year.

“I gave it a try, and I don’t regret trying it out. It’s a great sport, and being with the group of guys is a great experience,” Wachal said.