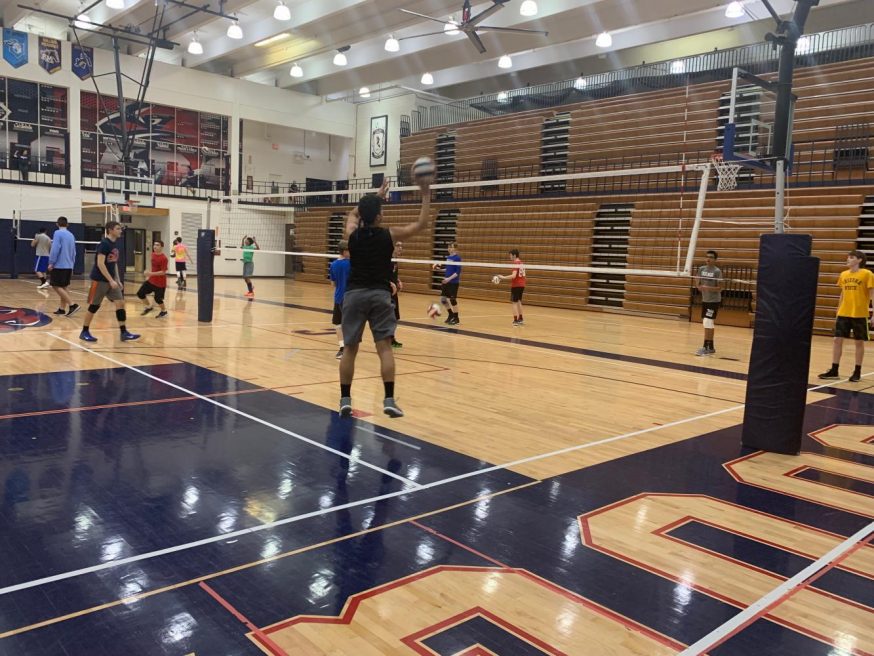 The boys’ volleyball team practices a week before their season began. The team finished last season with a 8-25 record (2-8 in MSL West).

The sophomores are middle blocker Sean Beckman, ‘21, and libero Joe Mclaughlin, ‘21. Brown said, “[This] is a good thing for us because this will give them a couple years of experience under their belt by the time they get to their senior year on varsity, so that will be nice. Then I also have a lot of great seniors who have years of experience too, to provide leadership for those younger guys.”

Beckman said, “Hopefully, I will fit in well and quickly. I know that sometimes it can be rough.”

The team lost its first match on Monday at Leyden in two sets, and lost their first home game as well on Tuesday against Prospect in three sets.

With its experienced seniors, the team hopes to improve on their third place finish in the Conant Invite from last season. The Invite, a six-team tournament on March 30, will be their next match.

Outside hitter Nathan Jones, ‘19, said, “It will be interesting to see how well we play together because it will be our third time playing actual matches together, but I think we can do well.” Jones added that after a week of practicing with each other, the team is looking good.

In terms of strategy, the team will try to play a faster offense than last season and run some different plays. “We’re trying to run — I wouldn’t say trick plays — but plays that can mess the defense up [by] trying to get them out of position a little bit and not [be] prepared for what we’re going to throw at them,” Jones said.

Though Brown does count on the team’s senior leadership and experience as strengths, he does see a weakness in them, which is that they get too tough on themselves and have high expectations. “It’s going to be a balance, for me, of pushing them to achieve those goals and those expectations they have for themselves, while not, if things don’t go as planned, having that be a barrier to them succeeding to achieve those goals,” Brown said.

About how one of the players wants to approach this season, Jones said, “I personally just want to have fun. Senior year, last ride with the team. Most of my best friends are on the team, so I just want not to have some drama and just have fun with everybody and have a good time, but also have that competing mindset and win some games.”