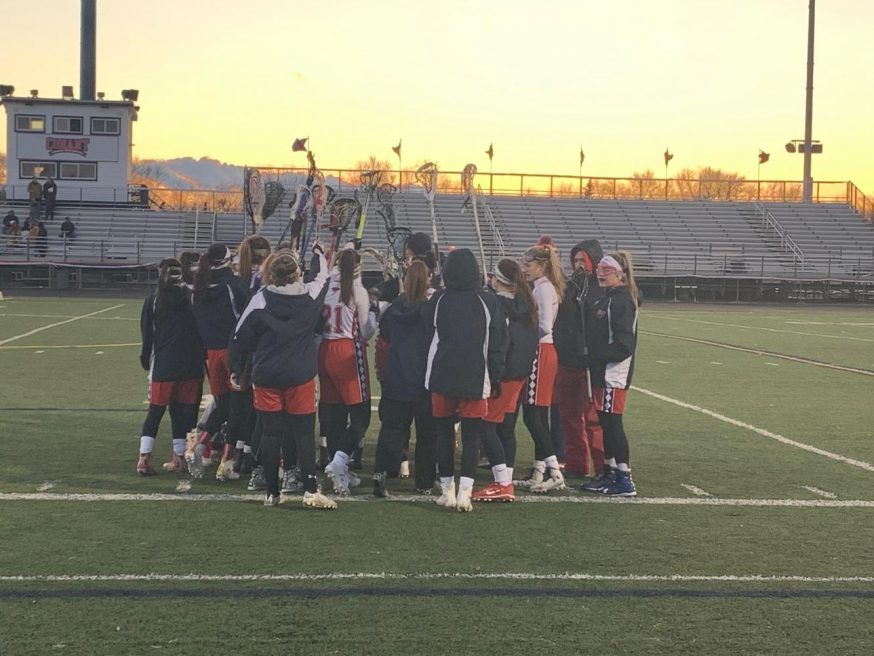 The girls’ lacrosse team huddles up before their game on Friday, which they lost 14-4 to Downers Grove North.

The girls’ lacrosse team has lost their first three games of the season, all with wide scoring margins.

Midfielder Hannah Shulman, ‘19, said, “I don’t think we’ve been going full out in practice, and I think we can work harder and push each other more so we’re competing more in games.” She added, “We’re very young and inexperienced in a way, and we need to encourage the younger girls to get comfortable with the older girls and become closer.”

Head coach Eric Jacobsen said, “We usually schedule pretty tough teams early to give us a measuring stick of where we’re at to see what we need to work on.” He added, “We are going to have time before conference after break to work on those things.” He also said that he is not disheartened about anything whatsoever.

“It will eventually head in the right direction. Sometimes it takes more time with certain groups than others, depending on what the dynamic is, what the chemistry is,” Jacobsen said.

One of the areas of the game the team said they need to work on is their physicality. Attacker Betsy Riley, ‘19, said, “I just find that all of us are friends, so going hard with each other at practice and like pushing each other to our limits is kind of hard for us, but we have to get past that level to really excel and win some games.”

Jacobsen said, “It’s something we’ve got to learn to because when you get more experienced officials, they call it the way the game ought to be called versus the new ones that kind of stop and worry about every little piece of physicality. The experienced officials let you play it a little bit more. We just got to up our game to whatever that threshold might be.”

The team will have its next game today at Nazareth Academy at 5 p.m.