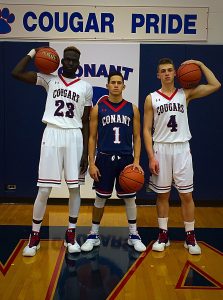 The Fremd point guard slowly took the ball up court. He passed to the point guard, faked the shot, and elevated for the finger roll layup. As soon as he let go of the ball, Jimmy Sotos, ‘17, swatted it out of the air, stopping the attack cold.

Although this second quarter play didn’t prevent the Cougars from falling to the Vikings 48-37 on Friday, Dec. 10, the team still has a positive outlook with their 7-2 record thus far. Head coach Tom McCormack stated the importance of playing tough games at the start of the year. “We don’t sugarcoat our schedule. Fremd is a very tough team. Now we know where we’re at,” he said. “The loss shows what we need to do to be more successful in the future.”

Danny Ranallo, ‘17, said, “Friday’s game was clearly a tough one. We didn’t want the outcome we got, but the only thing to do is move forward and ask ourselves, ‘What’s next?’”

Sotos said that the Fremd game was “a disappointment. We didn’t play our game. But we’re gonna stick together, rally around each other, and be ready for [next] Friday.”

With another big conference game coming up on Friday, Dec. 16 against Barrington, the team is ready to learn from its mistakes. “We don’t have to change much. Just fix some small holes, tweak some little things,” McCormack said. “We’ll keep practicing, work on the fundamentals and play basketball.”

Conant had a solid start to the year even with the loss to Fremd. With a roster packed with talent, size, and athleticism, the Cougars have it all. Starting off with a 4-1 record in the Majkowski Thanksgiving Tournament, they followed that up with two big conference wins against Schaumburg and Hersey. Now sitting at 7-2, the Cougars are preparing for the rest of the season.

With the team rated very highly coming into the season, McCormack insists that the team doesn’t feel any pressure. “Pressure is internal. Our goal is to be playing our best basketball in February and March.”

McCormack contributes a lot of the early season success to the experience of the first six players in the rotation: seniors Sotos, Ranallo, Mike Downing, and C.J DeShazer; and juniors Ben Schols and Ryan Davis. Sotos agreed that experience was a huge part of the hot start: “Last season we were still getting a feel for things. This year we’re very experienced and ready.”

The returning seniors reached the super sectionals in last year’s state tournament. Sotos said that game has stuck with him over the off season. He said, “When we lost the super sectional, McCormack grabbed me and told me to ‘remember this moment for next year. Remember that sting and make sure we don’t feel it again.’”

Hildabrand said the key to winning the rest of the season is playing better as a team. “We have to close the fist. Get five gifted players on the court to combine into one solid unit,” he said.

McCormack similarly said, “The day-to-day interaction is key. We have a real bond out there. True brethren.”

Both McCormack and Hildabrand are focused on doing well in the state tournament. “It shows what you’ve achieved since November. It’s a measure of how much you’ve improved,” Hildabrand stated.

“Our goal is to win as many games as possible and be able to get to the one we want, which is the state championship,” Ranallo said.

He emphasized how special this year was to him. “It being my last year playing competitive basketball, I want to go out with a bang,” he said.

McCormack said his true goal for the rest of the season is to teach his players how to be better people, basketball players, and teammates while still competing and winning games.

Ranallo said, “We all believe we can do it; we just need to make it happen. We are starting to realize what it means to us.”