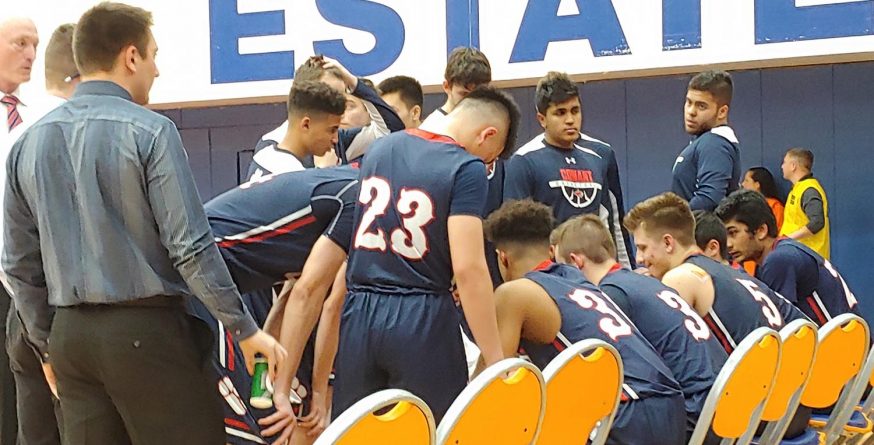 The team huddles together during their first conference game against Hoffman Estates on Friday.

This past Friday, the Cougars played their first conference game of the season, visiting the Hoffman Estates Hawks and winning 42-32.

The Cougars consistently kept ahead of the Hawks on Friday’s game and never gave up their lead. “From the get-go, we were doing what we were supposed to do, doing exactly what coach says, and the intensity from the team was great today,” captain and guard Anthony Wachal, ‘19, who scored eight points, said.

According to head coach Jim Maley, last year’s first conference game was one of the team’s worst games of the year. The Cougars avoided a repeat of this by playing both strong offense and good defense on Friday. “One of our Achilles’ heels this year is not being strong with the basketball, and we’ve committed far too many turnovers. I don’t know the numbers, but it seemed we were pretty good tonight taking care of it,” Maley said.

The Cougars are approaching this season confidently, even after losing key players such as Ryan Davis, ‘18. Wachal said, “People don’t think we are going to be the same team, but I think we can be even better.”  Captain and forward Raj Mittal, ‘19, who scored 14 points, added, “People are underestimating the Cougars, but we’re ready.”

The Cougars played another away game on Saturday against Glenbrook South. The non-conference game ended with a 65-40 loss. On Tuesday, the Cougars played an MSL crossover game against Wheeling at home and won 66-63 on a last-second three-pointer, bringing their current record to 4-3.