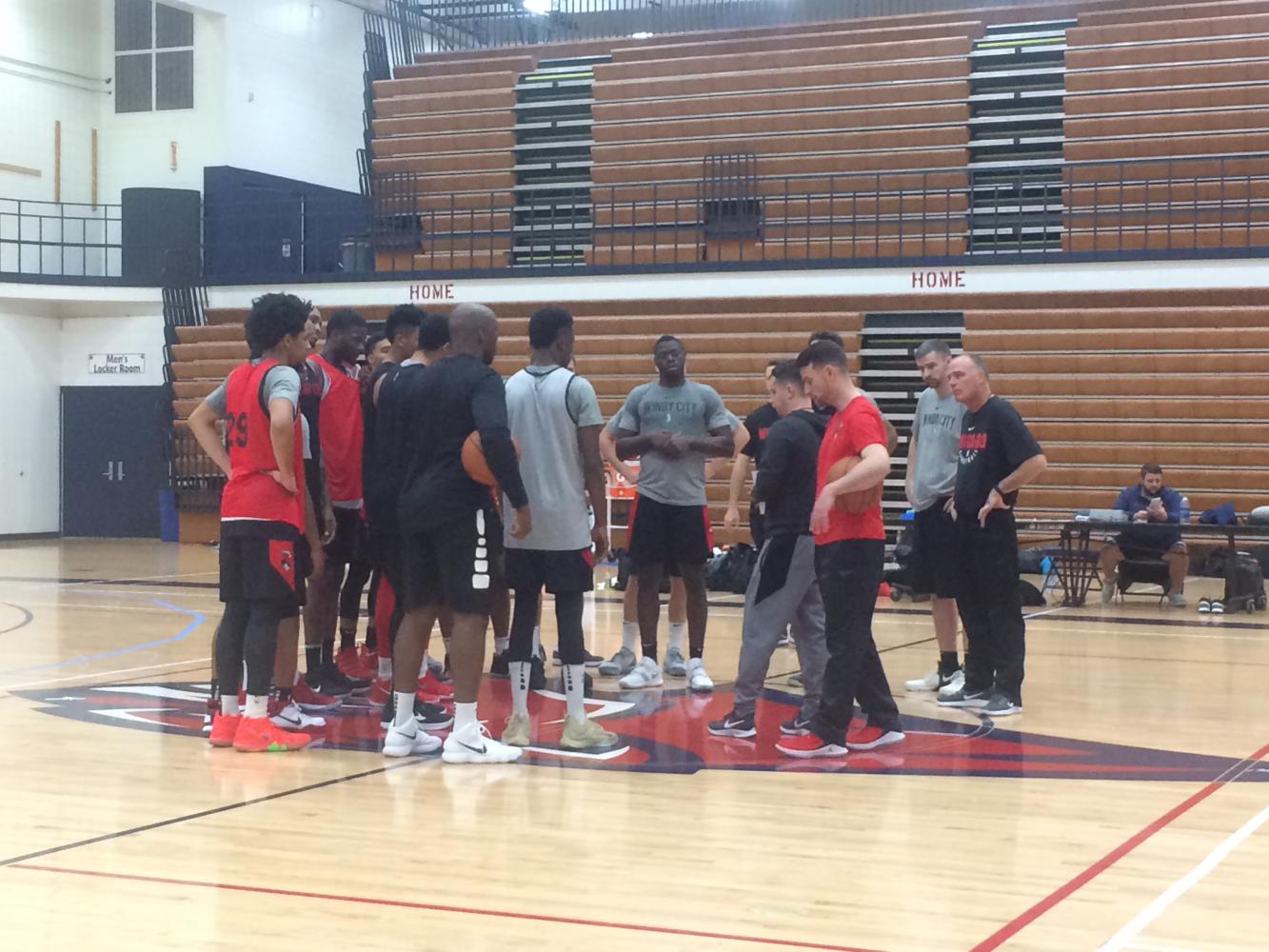 The Windy City Bulls discuss their practice plan on Thursday.

Often, the Conant High School gym is where high school athletes compete and practice. However, last Thursday the gym played host to professional athletes, as the Windy City Bulls, the NBA G League affiliate of the Chicago Bulls, practiced there from 5-6:30 p.m.

This was the second day of the week that Windy City practiced at a high school, as they did so at Bartlett High School on Tuesday. Manager of Basketball Operations Josh Kreibich said that because the venue they normally practice and play at, the Sears Centre, had a Jake Owen concert that night, Windy City had to find another place to practice.

Kreibich said, “An opportunity presented itself to get out in the community, and it just made sense to open it up to the public so everyone can get a look at what we’re doing behind the scenes.” Kreibich added that unlike the NBA, the G League is more accessible for fans and that a practice like this helps fans become more aware of the team and be encouraged to come out to a game during the year.

The practice was the team’s second of the day and unlike the first one, it was non-contact. Head coach Charlie Henry said, “This one, we just wanted to clean up some stuff, hit a ton of shots, and just work on some execution at both ends.” This was Windy City’s sixth practice of the year.

Players participated in a dunk contest during the practice. “We just did it for the fans that were here. We figure they enjoy it,” Henry said.

Players found the experience to be humbling. Guard Jon Octeus said, “It was very humbling because obviously, you know, I come from a high school [Royal Palm Beach in Miami] where, you know, basketball is very appreciated. I know that the students here that watch us play and practice, you know they have aspirations and dreams of being able play in the NBA someday. It was very inspiring to be out here and show them a good time.”

Varsity boys’ basketball player Ranier Roque, ‘19, said, “I saw a lot of players. [I saw] that they were different players on different levels. I was able to see some guys communicating better than others, saw some people going harder. That really just showed me that this season, if I really want to prove myself to coaches or stand out, I got to do extra things.”

Windy City opens up their season on Friday at the Sears Centre against the Lakeland Magic at 7 p.m.