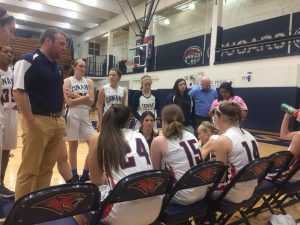 Coach Deirdre Naughton (middle, center) talks to her team during a timeout.

Down by two after Conant’s Stephanie Mazuruk, ‘19, made two free throws with just under three minutes to go, it looked as if the Cougars had a chance to come on top in their Dec.2 game against St. Viator. However, the Lions finished the game with an 8-0 run that put the final score at 56-46 on Saturday.

“We just lost track of the energy. There wasn’t a lot of talking. We went against some tough players. We tried,” forward Ania Baker, ‘18, said.

One of the tough players the Lions had was guard Myia Clark, ‘18, who scored 29 points and has been a four-year player on their varsity team.

One of the skills Cougar Head Coach Deirdre Naughton said she wants the team to improve on is rebounds. “We had in our book they had 17 offensive rebounds. We’re not going to be able to win games if we can’t keep their offensive rebounds low,” she said.

“In practice, people are going to have to take more ownership of rebounding the basketball,” she added.

“We’re not boxing out enough. We need more competitiveness from each other, and we need to have a body on everybody,” Baker said.

There were bright spots for the Cougars. Hannah Shulman, ‘19, had 12 points, while Mazuruk had 11, and Naughton said the team chemistry is coming together over the past two games.

“There was a time where we moved the ball really well,” Naughton said. She added that when all five players on the court touched the ball, the team got really good shots.

Still, Naughton said the chemistry is a work in progress as Baker and Amanda Klingsporn, ‘18, returned to the lineup last week after dealing with injuries, and everyone on the team is adjusting to new roles compared to last season.

The Cougars play their next game at Conant vs. Schaumburg on Friday.

“They’ve got some good players this year, but we’re also good. We’re hoping to be really competitive with them this year,” Baker said.