Is the press truly free? 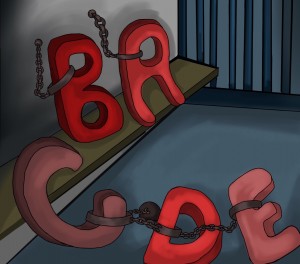 Valeria Vesco | Conant Crier
The First Amendment to the US constitution reads, “Congress shall make no law respecting an establishment of..or prohibiting the free exercise thereof, or abridging the freedom of speech, or of the press…” From the Paris terror attacks to the looming threat of ISIS, beyond the basic role of violence, the other common thread throughout many global current events is press coverage; the means in which vital information is shared with the public.

High schools across the country have also been faced with the threat of censorship. One such instance recently occurred at Fond du Lac High School in Wisconsin. Student staff members of the Cardinal Columns were met with backlash from the principal and superintendent last March in response to an article published on rape culture. Events that followed included censorship of subsequent issues, a student organized sit-in, and ultimately the creation of a committee of students and staff whose responsibility is to create policies that ensure the freedoms of student press.

Cases ranging from centuries ago in England all the way to modern day Syria and even today’s American high schools have all raised important questions regarding the role of media and the press: How much do people really have the right to know? What are the risks for journalists and the media for covering such controversial and often times dangerous issues? And most importantly, where do we draw the line?

A Brief History of Freedom of the Press in America

In 1735, a New York journalist by the name of John Peter Zenger was arrested on charges of “seditious libel” after publishing editorials critical of the British colonial rule. However, he was defended by Alexander Hamilton, who persuaded the court to throw out the charges. 55 years later, the First Amendment was passed, declaring that American citizens have the right to practice freedom of speech. Eight years later, however, in 1798, President John Adams passed the Alien and Sedition Acts intended, in part, to silence journalists critical of his policies. The act did not go into effect and eventually backfired when Thomas Jefferson beat Adams in the 1800 presidential election. Ever since, there have been various attempts to censor journalists through means such as criminal libel laws, which allow journalists to be prosecuted under the same laws that were used against Zenger. These laws, along with many even more restrictive laws jump started an organization in the eighties in order to protect journalists and the media’s role in the world’s affairs.

Reporters Without Borders is a France-based non-profit organization started in 1985 by four journalists with the goal of promoting and defending freedom of the press. The organization has two primary interests: internet censorship and providing various types of aid to journalists assigned to dangerous locations. Reporters Without Borders also has consultant status at the United Nations and a role in media in 150 countries worldwide, including Burma, Pakistan, and Somalia, just to name a few. In 2004, a Reporters Without Borders headquarters was created in the US in an attempt to expand the missions of the organization internationally and raise awareness with Americans so that other nations can receive the same rights regarding freedom of the press and information that the US has.

According to Reporters Without Borders, in Syria, there have been 43 journalists killed and 13 journalists imprisoned just in the past four years alone. In areas such as Syria, where Jihadi groups such as ISIS have great influence, part of their aim in taking control of certain areas is using violence against news sources. In areas with extreme violence from militant groups, groups exert their control even further by harming the journalists who risk their lives in order to share the conditions with the rest of the world and open the eyes of other nations to the atrocities going on internationally. One example of this lies in something that has been very prominent in the news dating all the way to the administration of George H.W. Bush; the unrest in the middle east. Very seldom does a week go by when the all too familiar scene of a reporter close to the front lines or overlooking an angry mob is not shown on the national nightly news. Thanks to press coverage, all Americans, if they choose, can see, hear, or read for themselves about the unrest taking place across the globe.

Although some nations have made huge strides in press freedom, the statistics of those who have not is truly staggering. According to freedomhouse.com, less than 14 percent of the world’s population live in countries with a Free Press. North Korea is one of the biggest culprits of censorship, where only a select few foreign journalists are allowed access to cover North Korean events; however, they must be accompanied by someone whose assignment is to ensure that information abides by the guidelines of Supreme Leader Kim Jong-Un.

The Future of Information

Violence and warfare cross borders, countries, and continents, and therefore it is our right as citizens to be informed of what is going on in other nations. Journalists have the vital job of entering sometimes dangerous conditions and reporting back to the world in order to provide assistance to others.

That is why even in high school it is important that we stay informed about our community and the rest of the world. Freedom of the press needs to become a global standard in order to address the problems of its inhabitants. In countries such as North Korea, in which information is censored, other countries have no way in knowing the true state of the nation or the extent of its problems. Due to the various censorship laws that are present in many foreign nations, it is important that in America, where we have these freedoms, they are exercised. Sharing our opinions and covering things that affect us as teenagers is essential. Often times this means that opinions do not coincide; however, we also have the right to share those ideas in a constructive outlet. So go ahead and share your thoughts on a controversial topic in Social Studies class or talk to your peers about a story you heard on the news so that we can open up the lines of communication between people of different beliefs. Information is the gateway to improvement, and it is our task as the world’s future leaders to be a part of a better-informed world.