The changing face of Feminism 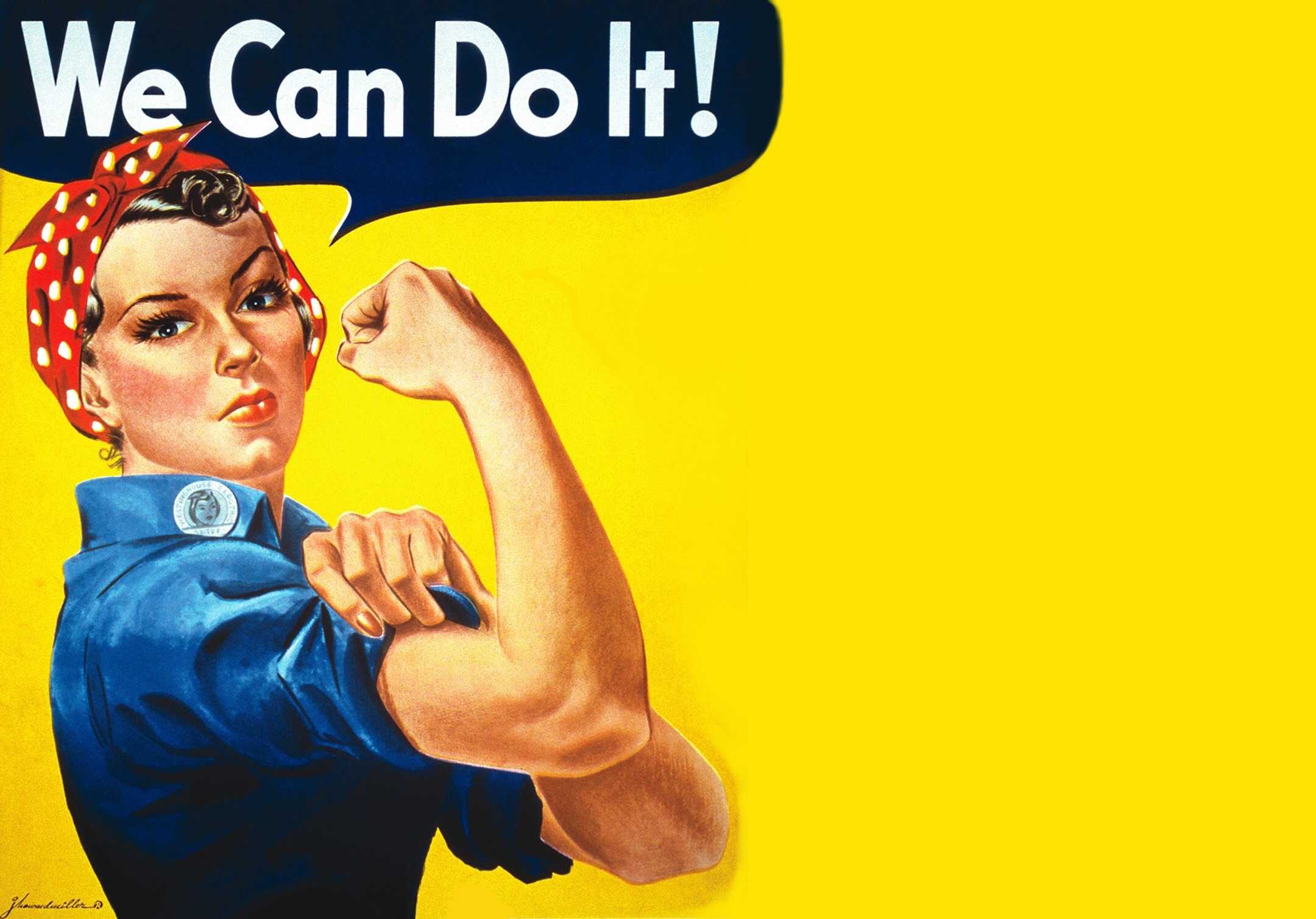 “Other people call me a rebel, but I just feel like I’m living my life and doing what I want to do. Sometimes people call that rebellion…especially when you’re a woman.” -Joan Jett

If you look up the word “feminism” in the dictionary, this is what you find: “The doctrine advocating social, political, and all other rights of women equal to those of men.”

Women and girls have been discriminated in the home,  the workplace, the media, and more. What people don’t seem to know is that there are ways to stop this injustice.

Many men have begun to identify themselves as “feminists”–people who fight for gender equality. Campaigns now exist to entice more men to become feminists. One of the most popular and effective campaigns, HeForShe, encourages men to fight for women’s equality. The movement for gender equality was originally conceived as a struggle led by women, only for women. In recent years, however, men have begun to stand up in addressing inequalities and discrimination faced by women and girls.

“This campaign is important because it reminds us that everyone should work to spread the cause of equality, not just the group that is directly affected,” said Asra Syed, the Feminist Club Advisor and English Teacher. She explained that she likes how it encourages men to stand up for the issue.

On the HeForShe campaign website, a pledge is offered for site visitors to sign. When a male signs the pledge, the site states how many males have stood up for gender equality. As of this writing, over 275,000 males signed the pledge. If you are interested in pledging, go to www.HeForShe.org.

“Justice is best achieved through campaigns and activism, whether it is a petition, a protest, or a bill,” said Syed Ali, a member of the Feminist Club.

Last year, actress Emma Watson (who played Hermoine Granger in the Harry Potter movies) visited the United Nations building in New York City and gave a 12-minute speech about the past, present, and future issues of feminism. She begins the speech by saying that she was only eight years old when she began questioning gender discrimination when she was called “bossy.” Later, she talks about turning 14 and being “sexualized by certain elements of the press.” She also states how “man-hating” is something that needs to stop.  Shortly before giving the speech, she was named the UN Women Goodwill Ambassador and, in 2014, the Ms. Foundation for Women named Watson the Feminist Celebrity of the Year.

A common misconception around the word “feminism” is that it suggests women should be considered superior to men. “Feminism stands for gender equality, not female supremacy,” explained Senior Sarah Richter, a member of the Feminist Club.

As we know, gentlemen hold the door for girls and they pay for their date’s meal. Some may think this shows superiority, but can’t it just be a nice gesture?

Social Studies Teacher Amy Spizzirri, who also teaches Women’s Studies, said, “I think women and men should be respectful of each other [not one more than the other].”

Another misconception of feminism is that women are the only ones fighting for their own rights. Spizzirri explained, “Men are helping, but it’s difficult to fight indiscriminately for something one has already achieved. Women have more to gain and everything to lose. There is more at stake for [women]; therefore, they tend to fight harder.”

Spizzirri continued, “Men can be supportive and take women’s achievements seriously and celebrate their achievements independently rather than comparing them to the achievements of men.”

Ali noted, “…Some people are very active in fighting for feminism while others are not. This is true for men and women. Therefore, it is hard to say that generally men and women both fight as hard for feminism.”

Unfortunately for feminists, the “meninist” movement–a movement that mocks feminism–has also grown popular.  Besides all the backlash against feminism that is already out there, men are now calling themselves “meninists” on Twitter to create a revolution against women. It is encouraging men to become meninists instead of feminists and ruining efforts of women who have been fighting for equality for years. For more information, see the Crier column called “The Menace of the Meninists.”

Freshman Amaan Abbas said, “Just like any other topic, you’re always going to find someone who disagrees. If men have more rights, it’ll be just like when whites are treated with more respect than people of color.”

Abbas explained, “The war for equality isn’t over yet.”

Super Bowl XLIX–as famous for its commercials as the game itself–aired in February and became the most watched broadcast in the history of American television. Often, the commercials are funny, but this year, one that stood out from the rest because of its inspiring message. It was an ad for Always called #LikeAGirl. It has aired on several television networks and has been seen all around the globe. More recently, the company aired a new commercial with a similar focus.

The original ad showed boys and men being asked to do things “like a girl.” After that, young girls were asked to run like a girl. They ran strong, fierce, and confident. On the more recent commercial, it shows multiple girls participating in a variety of different sports and activities including rock climbing, chemistry, and basketball. All of the girls say they do it “Like a Girl.”  Today, males use “like a girl” as an insult to other males. If a guy isn’t athletic, they are compared to a girl, which is extremely insulting to females. The commercial points out that comparisons like these destroy a young woman’s confidence.

Women are also strong and athletic. The difference is, an average man has more muscle mass than an average woman and is therefore stronger by definition. This media representation shows that women are viewed as weaklings, and if a male is weak or less strong than other people, they’re compared to a girl. This is extremely insulting because it implies that being a girl is a negative thing.

Women in the Workplace

Most of us know the iconic character, Rosie the Riveter, and that she symbolizes feminism and women’s economic power. During World War ll, Rosie was advertised all over the country and even to Great Britain, encouraging women to join the workforce and replace male jobs while men were off fighting war. Women quickly responded to Rosie, who had convinced them that it was their patriotic duty to enter the workforce.

Syed said she believes that the steps toward equality have greatly improved, but there is still work to be done. She wants more men to get on board with the issue and fight alongside females.

“There is still an expectation that women are the homemakers and men are the breadwinners,” said Syed. “Even though women’s rights have improved greatly compared with our nation’s past, there is definitely still more work to to be done, and men and women will hopefully both work toward equality for American women and women all over the world.”

According to money.cnn.com, females are currently making 30% less than their male counterpart. For example, if a man had a job and made $100,000 a year, a female doing the same job would only be paid $70,000. With that being said, in the 1960’s, women were paid only or less than half of a male’s salary. There has been major improvement, but there is still a long way to go before pay equality becomes a reality.

Syed also pointed out that girls don’t, but should have, equal opportunities in education. According to the Global Campaign for Education, “Nearly four in ten girls reported being made fun of because they are a girl compared to under one in ten for boys.” The campaign also states, “Pupils felt that male teachers are ‘more intelligent’ than female teachers, but female teachers were ‘more caring’ than male teachers.” From a young girl’s education to the career she may devote her life to, the playing field just isn’t equal.

Women in the Media

Women are constantly sexualized by the media. Women are seen as objects and only important for their looks. “Why does there have to be a woman in a bikini in a car commercial?” asked Syed.

Consider this: besides Calvin Klein, there aren’t a lot of sexualized male commercials. It’s women who are used for their physical appearance to appeal to men. It’s not the other way around.

“Worldwide, women are still being treated like objects simply for being women–a factor they cannot control. Women in our society are commonly objectified and sexualized, while men are perceived as the ones in control,” said Richter.

Spizzirri pointed out, “When Hillary Clinton ran in the primary against Barack Obama, the media focused on her hair and her attire as much or more than her political stance on issues, which is sorely disappointing and insulting.”

This shows how outdated and negative the media’s role in society is by hurting the physical reputation of a woman instead of promoting the political aspects that matter.

What You Can Do at Conant

The fight for equality has made progress, but there is still a lot of work left to be done. After a century of fighting for equal opportunities and rights, women deserve to achieve these goals.

To learn more about women’s role in society, feminism, and its evolution to today, you can enroll in Women’s Studies class. It is a one-semester course that is taught by Spizzirri. If you have any questions, contact Spizzirri in the Social Studies office or at [email protected]

To get involved in the movement towards equality, join Conant’s Feminist Club. The club meets on Mondays after school in room 119 until 4:30. Syed points out that there is no 4:35 bus on Mondays, so students would have to arrange their own transportation or wait for the 6:10 bus. The group is advised by Syed and run by the student board. They discuss and participate in activities regarding feminism and women’s rights. To join or ask any questions, see Syed in the English office or email her at [email protected]