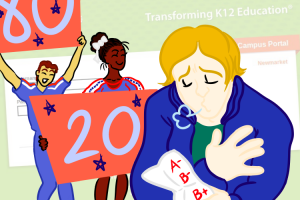 When students see the green Infinite Campus Portal notification pop up at the end of the academic quarter, they either feel a sense of relief or feel their stomach drop. After the quarter grade is locked in, there’s no changing it. Because this anxiety-ridden process is mentally tolling and doesn’t accurately represent students’ performance, District 211 decided to remove the quarter system and switch to an 80-20 grading system next year.

The Crier understands that learning is a continuous process and believes that it would be better reflected by the new 80-20 system, D211’s new grading scale that eliminates academic quarters.

The 80-20 shift relieves a lot of pressure associated with a quarter system and ultimately allows students to achieve better grades. The quarter system was originally put in place as a reporting mechanism to update parents and students. Now, with Infinite Campus Portal allowing gradebook access 24/7, quarters have become unnecessary. In fact, quarter grades create an illusion of a fresh start for students, but, in reality, “the majority of students are harmed by having quarter grades,” said CHS Principal Julie Nowak.

Dean of Students Derek Fivelson adds that the semester system “is a more accurate representation of a student’s grade.” The 80-20 system lends more opportunities to students to improve their grade. It also gives teachers the leeway to do long-term projects and gives students more meaningful opportunities that allow students to absorb the curriculum.

Although the 80-20 switch is a step in the right direction, we believe that other measures should be taken in conjunction to improve the grading scale.

For example, standard grading procedures should be implemented across the school. Currently, certain classes like physics only use points, while other classes like math exclusively use letter grades. Not only does this create confusion among students, but it’s also inconsistent. Certain grading scales make it inherently more difficult to earn a good grade in class. In math, for instance, having a set value for each letter (i.e., B is the equivalent of 85 regardless of whether the student earned an 87 or 83) slightly skews students’ grades. So, if a student receives 100 on an exam, the gradebook only allows a maximum score of 98. The student then loses out on two percent that could help keep that student’s grade up when, in harder chapters, he or she doesn’t perform as well.

A grading system with more accurate points or percentages reflects a student’s true performance in the class and could make the difference between receiving an A or a B or receiving a B or a C. Standardizing a point system may not work for classes like English, where there is a lot of subjective grading involved, but it would definitely be beneficial across math, science, and social studies classes.

Additionally, teachers instructing the same class should determine a standard of grading across the level. For instance, all the S338 Accelerated Chemistry classes could develop a system for how labs should be graded and what constitutes partial credit. That way, students across the level who perform similar will receive similar grades regardless of the teacher. Creating standards makes grading less subjective and ultimately, more fair.

Grades represent a major stressor in the lives of high school students. Improving the grading process at CHS means improving the lives of students. Thus, the Crier supports the 80-20 switch, and the aforementioned changes in their goal of more accurately reflecting student performances and capabilities.