A letter to my sister: Trump’s attitude towards women 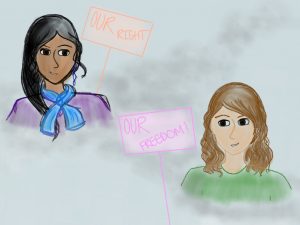 I understand your anger about the decision that was made on November 8, Election Day. I don’t have a definitive answer as to why or how exactly this came to be, but I can, as an older sibling and a teenage girl, offer advice on how to handle what you may face in the next four years as a result of Trump’s attitude towards females.

Sexual harassment: First of all, Trump had said that regarding sexual harassment in the workplace, he’d expect a woman, like his own daughter, to just “find another career or find another company if that was the case.” That’s not the right call. Regardless of your gender you should not be harassed in the workplace, or any place, period. You’re a human being who deserves the same amount of respect and humility as everyone else. If you want the harassment to stop, don’t quit; that doesn’t solve the problem; it only avoids it. You should report the harassment to your superior (like a boss) or the Human Resources Department. If you’re being harassed in school, tell a parent, teacher, counselor, or principal. It’ll make a change and put a stop to future problems for other people.

Body and Beauty Image: Alicia Machado, a former Miss Universe, was deliberately nicknamed “Miss Piggy” and “Miss Eating Machine” among other things by Donald Trump when she was running for Miss Universe, and Trump was an executive producer of the pageant. As a result, Machado suffered from anorexia and bulimia for five years and still is recovering from the psychological trauma. Despite the fact that Trump, our president, condones this form of body shaming, you need to remember that beauty comes in all shapes and sizes, whether that be a plus size or an extra small. In order to be healthy weight, whether big or small, you should be exercising regularly once a day and eating three healthy meals a day along with two small snacks.

In his book, “Trump 101: The Way to Success,” he can be quoted saying, “Beauty and elegance, whether in a woman, a building, or a work of art, is not just superficial or something pretty to see.” Basically, he equates women to aesthetically pleasing art like buildings. No, you are not objects just meant to sit still and look pretty for some entitled snob; you’re your own person, and that means you can be whomever you want to be.

Jobs: Trump once said to a female reporter, “You wouldn’t have your job if you weren’t beautiful.” He’s wrong. That woman wouldn’t have her job if she weren’t qualified. You can’t just automatically get a hard job like reporting if you don’t have the credentials and skill to fulfill it. You shouldn’t have to worry about looks when it comes to your job because beauty isn’t a qualification; integrity is. If you want a good job, you have to work for it, not just sit in front of a mirror applying makeup.

Why would such a progressive country elect a man whose views match that of America back in the 1900s? He believes women should be put in “their place,” whether it’s on a pedestal or below men, and it isn’t right. All girls should be put on the same level as boys.

Girls, don’t lose hope in a time where you’ll need it most. The road ahead may be a difficult one, but if you keep your heads held high and remember that you’re just as worthy of respect as everyone else, then Trump’s misogyny won’t persevere and put you down.