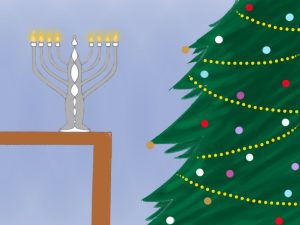 While retailers are decorating with garland and snowflakes, many people are upset about the lack of nativity scenes and wise men. This annual outcry comes from the belief that advertisers, government, and public and secular organizations are deliberately censoring any religious aspects of Christmas.

Once again Starbucks has triggered believers of the “War On Christmas” by releasing a series of cups, this year designed by Shogo Ota. Although they aren’t the holiday-series cups, the timing of the release has led many buyers to pick up pitchforks over what they thought were seasonal cups. “The War On Christmas” does not really exist because the holiday still outshines all others during the winter season. While many Americans are not celebrating it religiously, the holiday is still advertised throughout and celebrated culturally.

December is packed full of holidays. It’s the time of year where we all come together and spread joy. However, joy has been replaced by pessimistic comments because some people can’t accept that “Merry Christmas” is starting to evolve into “Happy Holidays”. This season is meant to make people happy and include everyone, but instead is causing an unnecessary controversy. As you can see, the “War on Christmas” illusion is still well and alive unfortunately.

While the season is supposed to be jolly and embracing love, many conservatives feel that retailers’ efforts to be inclusive of other cultures is overshadowing their traditional “American” Christmas. Many people are angry over the religious aspects being censored, but failed to realize that the holiday has grown into a less religious, more culturally celebrated by 81% of non-Christian Americans, according to PewResearchCenter.

According to Time, in a 2006 Chicago Tribune poll, sixty-eight percent of respondents confirmed their belief in a war on Christmas. “War on Christmas” believers feel that Christmas is being overcast by other seasonal holidays. In reality, it is the opposite. Christmas is advertised and broadcasted the minute Halloween is over. From billboards to commercials, it’s difficult to avoid. It takes over an entire two months filled with endless advertisements and Christmas specials all over TV. There’s hardly any other specials or advertisements about holidays like Hanukkah or Kwanzaa.

According to the Galegroup website, the supposed “War on Christmas” was revived by Peter Brimelow, an anti-immigration supporter, in the early 1990s. The whole idea of a “War on Christmas” is part of a large pointless battle against multiculturalism.

The “War on Christmas” is nothing but an excuse to attack the growing change of embracing multicultural beliefs rather than just focusing on one culture. Christmas is far from being removed from the spotlight, considering that a majority of Americans celebrate it religiously or culturally.