Go Set a Watchman: Might we kill a mockingbird?

Should the sequel to To Kill a Mockingbird be released? 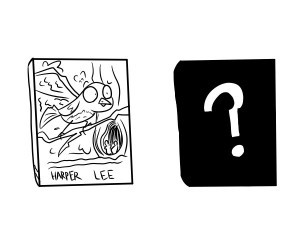 Could a sequel truly “kill” To Kill a Mockingbird?

A Continuation to a Classic

Position: Yes, the sequel should be released

One of the biggest trending questions in the literary world is: “Should the sequel to Harper Lee’s iconic novel To Kill a Mockingbird be released?”

I believe that releasing the sequel, called Go Set a Watchman, is a wonderful idea. Readers want to know the future of the town and its characters. Does racism change in Maycomb over the years, and does Scout have any role in it? Do Scout and Dill really end up getting married? What exactly happens to Jem after the incident with Boo Radley and Bob Ewell? There are so many unanswered questions about this fantastic book.

Said to be about Scout as an adult and her trip to go visit her father back in Maycomb, the book seems to promise an answer to the initial question: “What happens after everything?” I believe that releasing Go Set a Watchman will satisfy everyone’s hunger for more of Lee’s beautiful literature, and give us a bit more insight on the life of Scout Finch. In the end, the choice to release this sequel will make scores of readers across age groups rejoice again.

The Blemishing of a Beautiful Classic

Position: No, the sequel should not be released

To Kill a Mockingbird has sold 30 million copies in 60 languages since its original publication in 1960. This magnificent literary work has taught multiple generations of people to “walk around in someone else’s shoes,” just like Scout learned to do in the novel. Why should this masterful classic be tainted by a sequel? To Kill a Mockingbird has had readers applauding the author Harper Lee for decades, and talk of a sequel has created many high expectations for readers. Everyone is at the edge of their seats, awaiting another masterpiece.

I believe if Go Set a Watchman isn’t as great as the classic itself, it will leave readers with a bad aftertaste for the tale they once adored. In fact, Go Set a Watchman was originally rejected by the publishers because they believed that the story of Scout as a child would be a better read. Resurrecting this ancient book and publishing it would only leave fans with a new perspective on the now-adult versions of the lovable children in the book. Scout, Jem, and Dill were meant to be seen as children because they were the images of innocence; they were blind to the evils of the real world. By transforming them into adults, the retrospective message of To Kill a Mockingbird is stolen away by the characters’ adulthood.

Releasing this  sequel could actually become a detriment for a once beautiful literary feat because I believe people will now see To Kill a Mockingbird in a different light. Some stories are best left uncontinued, left for the reader’s own interpretation. The release of Harper Lee’s classic is risking the possibility of tainting Lee’s literary legacy.

Tweet us @conantcrier and tell us what you think about the To Kill a Mockingbird sequel, Go Set a Watchman with #CrierOpinions or comment below!