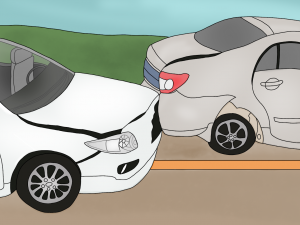 School has only been in session for a few months, yet there have already been multiple minor accidents in Conant’s parking lot. Of course, everyone makes mistakes, but many scrapes could be avoided if people drove more carefully. The aggressive driving tactics and distracted driving commonly seen in first lot make the parking lot more dangerous than it should be.

At the 3:30 bell, a horde of students descend on the parking lot, scrambling to get out as quickly as possible. This rush makes the lot incredibly difficult to navigate as a mass of cars moves slowly towards the exit. It’s understandable that students want to get home or go to work quickly after school lets out, but driving recklessly only worsens the traffic. Drivers who merge haphazardly in front of others may spare themselves from idling in the parking lot for another 10 minutes, but they cause a chain reaction of blocked traffic that inconveniences everyone else.

Teenagers aren’t the only ones making the Conant parking lot dangerous, either. Many parents drive their children to school, and while they usually follow the traffic rules, some ignore the clearly labeled lanes and signs in favor of creating their own route, disrupting the flow of traffic. These parents probably have places to be and would like to save time, but not following the traffic rules is counterproductive. It ends up leading to more delays for other people, and makes the parking lot unsafe for pedestrians, who expect cars to follow a certain path.

Given the sheer number of students who drive to school each day, implementing more supervision of the parking lot would be exceedingly difficult. However, the school should continue to emphasize the importance of safe driving and implement consequences for students who repeatedly ignore traffic rules.

Being able to drive to school and have a parking spot is a privilege and a responsibility, and the decisions we make behind the wheel have the potential to make an immense impact on others. According to the CDC, car accidents are the leading cause of death for teenagers. Although severe accidents aren’t likely to occur in parking lots, students should always drive carefully — including in the Conant parking lot.

With cold weather and icy roads approaching, driving safely is more important than ever. At busy times, the parking lot can seem chaotic and even dangerous, but it doesn’t have to be. After all, first lot is primarily used by students, and we have the ability to make it safer simply by making a few changes in the way we drive.