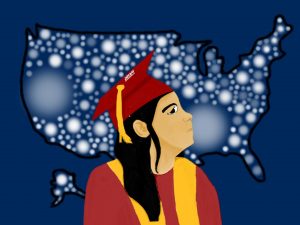 “Build a wall” is often what people think of when someone says Donald Trump, but since his presidency, he has found a new way to target illegal immigrants: eliminating the Deferred Action for Childhood Arrivals (DACA).

DACA is an Obama-era program that allows certain illegal immigrants who entered the country as minors a renewable two-year period of deferred action from deportation and eligible work permit. On Sept.5, Trump announced he’d phase out the program in six months unless Congress is able to find a replacement–putting 800,000 people raised in the U.S. at the risk of deportation. This incredibly cold-hearted and shortsighted act will not only hurt young immigrants but the American economy as well.

Supporters of Trump’s decision have praised him greatly for his cruelty, and Trump himself declared the reason he ended DACA was to protect the “millions of Americans who felt victimized by this unfair system” and lost their jobs and wages to illegal immigrants. However, there are two serious flaws in this conservative logic.

First, DACA is actually beneficial to the economy, which wouldn’t be the case if these immigrants were really taking American jobs. Studies performed on DACA recipients showed that the DACA dreamers make significant contributions to our economy by purchasing cars and homes, which translates to more revenue for the country through sales and property taxes. Recipients even start their own businesses, thereby creating more jobs and fostering economic growth.

The study also demonstrated that wages for DACA kids increased 42%, leading to more money being circulated into the economy, which benefits all Americans. A majority of DACA receivers make up the labor force and are entering fields such as science, creative writing, medicine, and chemistry. It’s clear that those with DACA benefits don’t take their opportunity to be in this country lightly. They make an effort to contribute back to the nation that gave so much to them; therefore, there is absolutely no reason to take away the benefits of this program from them and Americans.

In fact, ending this policy and sending almost one million people to their “home country,” where most of them have never even lived, would cripple the economy. A Fortune magazine study finds that it would take at least $60 billion of taxpayer money to deport the dreamers and an additional $280 billion loss to the economy. Losses like these are what cause a decrease in jobs, wages, and all the other things that Trump likes to scapegoat illegal immigrants for. Trump is allowed to hate these immigrants all he wants, but he can’t deny the benefit they bring to this nation.

The second major issue in Trump’s unprecedented decision is that he’d be deporting people who are basically citizens without the label. DACA recipients are those who have grown up in the United States, studied here, made friends here, and worked here. They don’t know any other way of life. They are essentially Americans; they share our culture and identity. In addition, they have no criminal record, as their benefits would be rescinded if they committed a crime. In the midst of hurricanes and white supremacists, Trump has chosen to target innocent kids and take away any hope they may have at a better life. It is utterly disgusting. To top it all off, Trump believes people support this decision, but numerous polls find that a majority of Americans wish to save DACA, including a majority of Republicans.

Although the president has given Congress time to come up with a solution, it seems unlikely that they will be able to within his deadline. At a time when the Congress needs to pass tax reform, raise the debt ceiling, aid Harvey victims, and figure out healthcare for American citizens, Trump shouldn’t be adding more to the plate. The three branches of government were established to work together for its constituents, not create major problems in the way Trump has. Congress’s first pass at saving the program failed, and who knows if they will be successful before March?

Despite the myriad of problems the congress is buried in, Senators Dick Durbin (D-IL) and Lindsey Graham (R-SC) are pushing for action to save DACA. The livelihoods of 800,000 hard working immigrants hinges on their success. It’s a bit comforting to know that Congress is trying, but this only goes to show how important it is that we, as students and Americans, educate ourselves on politics and choose the right people of represent us because many of the changes this administration makes directly affects our families, friends, and us. I sincerely hope that no future leader of the United States is as inflammatory and ignorant as Trump. He ran on the very popular “Make America Great Again” platform, but I guess he doesn’t realize that you can’t fix America if you are literally killing the dream.