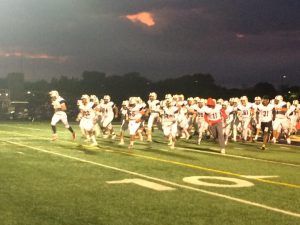 The Cougars run to their sideline after warm-ups.

The Cougars lost by six points for the second week in a row, but this time it was an overtime defeat on the road, a 27-21 loss to the Glenbrook South Titans.

In overtime, Conant was the first to have possession of the ball. Per National Federation of State High School Associations(NFHS) rules, the offensive team has a 1st-and-goal at the opponent’s 10-yard line. After the offense completes their possession, the defense goes on offense under the same rules, and whoever leads after each team has a possession wins the game.

On Conant’s possession, the Cougars ended up in a 4th-and goal at the two-yard line. Running back Jack Reiger, ‘18, took the ball to the right and attempted to extend the ball over the line of the endzone, but was denied by Glenbrook South’s defense by less than the length of a football.

On the first play of Glenbrook South’s overtime possession, running back Savontae Garner, ‘18, ran the ball to the left and reached the end zone, ending the game.

Glenbrook South coach Dave Schoenwetter said, “I think our kids just decided that we are going to dig down and gut it out at the end.” Schoenwetter said his team did gain a little momentum in the fourth quarter.

Conant coach Bryan Stortz said they were in position to win at the end, but they couldn’t execute.

“Our kids are battling their tails off and we need to find a way to win,” said Stortz.

Conant got off to a quick start with Kevin Polaski, ‘19, starting at quarterback for the first time this season. Stortz said he wanted a change to see if he could get something to spark the team.

On the first drive, Polaski found wide receiver Anthony Wachal, ‘19, in the endzone for an 18-yard touchdown.

The Conant defense did their job by forcing a turnover on downs on Glenbrook South’s first drive on the game, but on the first play of Conant’s second drive, Polaski fumbled at his own 19-yard line, his first of three turnovers of the game.

The Titans scored on that possession with a 2-yard touchdown from Garner, but missed the extra point, leaving the score 7-6 Conant with 11:56 to go in the first half.

Polaski fumbled again on the next drive at the Titan’s 35 yard line. Glenbrook South scored another touchdown on a 1-yard touchdown on 4th-and-goal by Garner, making the score 13-7 Titans with 5:33 to go in the first half.

Conant finished the first half strong with a 1-yard touchdown from Reiger with 1:26 to go. An important moment on that drive happened when Polaski ran 14 yards on a 4th-and-13 to keep the drive alive. Conant led 14-13 at halftime.

Scoring did not resume until Glenbrook South’s second possession of the half, where running back Andrew Gall, ‘20, scored a 3-yard touchdown at 5:34 remaining in the third quarter. Glenbrook South converted a two-point conversion to make the game 21-14.

Conant tied the game with 5:50 to go in the second half on a 5-yard touchdown pass from Polaski to tight end Mason Sykes, ‘18.

Both teams were unable to score for the rest of regulation, but Glenbrook South was close to scoring when kicker Julian Aragon, ‘19, attempted a 26-yard field goal, but missed with less than a minute to go in regulation. Polaski committed his final turnover of the night soon after that on an interception, and Glenbrook South ran out the clock, leading to overtime.

Schoenwetter was happy with how his team responded throughout the game, stating that his kids played down after down even in the tough moments of the game.

Stortz said, “We need a different outcome because they deserve it with all the effort they put in.”