‘Black Panther’ brings out new diverse side to Marvel 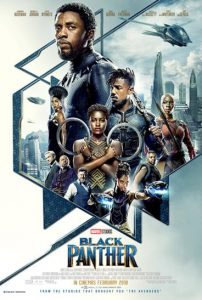 Image from Screenrant under Fair Use

Marvel’s first African American superhero movie has been receiving hype for quite some time, on Feb. 16, the highly anticipated movie finally dropped. Fans waiting for months have flocked to sold out shows to judge whether this movie was worth it. “Black Panther” definitely lived up to its reputation, wowing viewers with the beauty of Africa, well-thought-out music, and a fantastic cast. The film was directed by Ryan Coogler and stars Chadwick Boseman, Michael B. Jordan, Lupita Nyong’o, Martin Freeman, Angela Bassett, Danai Gurira, and Letitia Wright.

World-building is at the core of the movie, rather than expanding on the protagonist-antagonist plot line. This decision made the movie more unique and enjoyable. The movie picks up after “Captain America: Civil War” in the wake of the United Nations bombing. In the African country Wakanda, T’Challa (Boseman) is set to be king after his father is killed in the explosion. Wakanda fronts as a third world country but actually has technology better than any on earth. The king is also the Black Panther, the protector of Wakanda.

The concept is refreshing, as we’ve never seen a superhero originating from Africa before, especially one with such an interesting backstory. Coogler also focuses on bringing authentic African customs to his movie. The entire film, especially T’Challa’s coronation, includes elements of real African tribal celebrations with ethnic clothing, jewelry, and dances. The Dora Milaje tribe made up of all-women is  based off of the real women warriors of African tribes.

The visuals and music are perhaps the strongest features of this film. For example, the chase scene between Klaw (Andy Serkis) and T’Challa shows Shuri ( Wright), T’Challa’s younger, technologically genius sister, driving a holographic car in Wakanda, which appears in South Korea while T’Challa rides on top. It looks absolutely stunning, and one can tell it took a long time filming.

The car scene features the song “Opps” by Vince Staples and Yugen Blakrok. The fast-paced music gets audiences at the edge of their seats as they’re waiting to see the outcome of the chase. “Pray for Me” by The Weeknd and Kendrick Lamar and “All the Stars” by SZA and Kendrick Lamar are featured as well. Overall, the song selections in the movie were well made; however, it was a bit disappointing that the entire Black Panther album wasn’t featured in the movie. For instance, “Paramedic!” by SOB x RBE was perfect for when Killmonger (Jordan) murders the British museum’s staff, but the director chose to omit it from the movie.

The overall story was a bit predictable and dry. It had the usual familial issues and was rather bland. Going into the movie, I expected more car chases and fight scenes. The movie, however, only included one chase and a dramatic end fight. Though the movie was two hours long, it felt as if only an hour had passed. The writers could’ve added more to the movie, such as a redemption arc for Killmonger, but it’s understandable that they did not, as this was the beginning of the Black Panther. The highly anticipated sequel should be better with a more intriguing plot, as the background for the character has been laid out in this film.

Though the story lacked a star quality, the cast most certainly did not. Each cast member fit the mold of their character, and it could be seen that the director chose his actors after a lot of thought. Boseman really made the persona of an African king come to life. Jordan was perhaps the best, playing Killmonger, the potential antagonist. His character shed a spotlight on the numerous injustices African Americans throughout the world face, and though he was a villain, Killmonger became an inspiring figure for fighting those injustices. Shuri, Nakia ( Nyong’o) and Okoye (Danai Gurira) were not only empowering African American figures, but also inspiring women. They were never afraid to speak their minds, and each one of them was strong, intelligent, and capable, showing female audiences that women are just as powerful as men.

Even though Wakanda doesn’t exist, “Black Panther” certainly makes us wish that it did. This movie is worth watching in theaters, and we’re anxiously awaiting the sequel.