Opinions on “Dune” from a fresh watcher 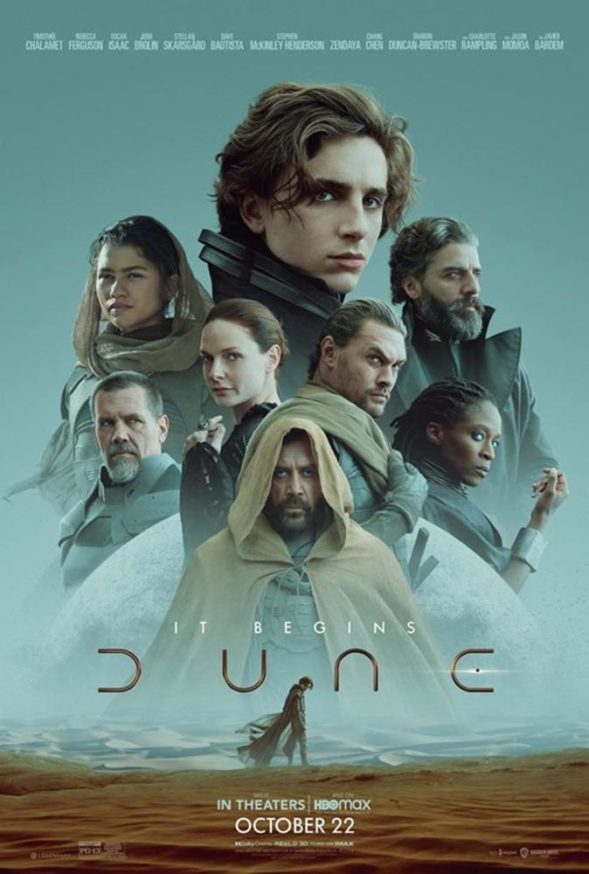 From IMDb under fair use

“Dune” follows the main character Paul Atreides (Timothée Chalamet), in a dystopian intergalactic society ruled by an emperor. The House of Atreides, Paul’s family, is one of the great families of the empire, and Paul’s father, Duke Leto (Oscar Isaac) is given stewardship of the planet Arrakis, or “Dune.” Throughout the film, Paul carries the weight of being the scion of his family as well as a destiny prophesied for him as the carrier of mystic/psychic powers. The planet Arrakis is a lucrative financial asset due to its stores of spice, a fuel for intergalactic travel.

The House of Atreides faces an uphill battle to establish diplomacy with the indigenous Fremen while also fighting off the other ruthless Great Houses of the galaxy who wish to return to Arrakis solely for economic gain.

“Dune” is a satisfying watch even without background on the novel. But like many movies, it includes both versatile successes and odd failures.

“Dune” (or “Dune I”) only follows the first half of the novel, which is a godsend given that even with only half the source material, the 155-minute movie is packed with information, worldbuilding, and action. I find the movie unique for its ability to leave you dizzy with its action and plot, and yet leave you unsure if anything has actually happened throughout.

In one word, the film was bizarre. However, it falls into ‘bizarrely good’ territory.

A lot of that bizarreness comes from the slightly complicated plot development. The plot is likely easier to follow for those who’ve read the book, but that being said, it’s not too bad. The trick is for the lay-watcher to assume any plot point is also an allegory for the Middle Eastern oil struggle. With this context, some of the more complicated scenes become instantly simplified.

In all seriousness, the intent of “Dune” was worldbuilding; most of the film is dedicated to setting up the mysticism and powers of one half of the world, as well as the politics of the conflict. The movie is inundated with information to set up what is yet to come in the second movie, and based on what is provided, the second movie should be hotly anticipated.

Overall, the casting is phenomenal. Timothée Chalamet excels as Paul Atreides, portraying a large range of Paul’s emotions effectively. One of the most fulfilling parts of the film was in seeing Paul grow into his role as the “Chosen One,” watching him learn to navigate knowledge he never knew he had. Chalamet exudes the mannerisms and spirit of Paul Atreides throughout the movie, balancing stoicism with vulnerability.

Rebecca Ferguson, who plays Lady Jessica, is one of the movie’s greatest strengths. She plays Paul Atreides’s mother, an unprecedentedly strong female character whose involvement in the mystic sisterhood of the Bene Gesserit actively fuels the plot forward. Her acting is terrific, and her character is unexpectedly complex for a “mother of the MC.” Jessica’s development includes a certain level of moral grey-ness as well as fallacy, while still capitalizing on her strength as a leader.

The rest of the ensemble cast is also incredibly pleasing to watch. Oscar Isaac, who plays Duke Leto, continues to prove his versatility, playing the serious patriarch of the family whose willpower and morality are the backbone of the House of Atreides. Jason Momoa and Josh Brolin were twin delights in the film. Both played weapons masters, and though Momoa’s character Duncan Idaho is more charismatic, Brolin’s Gurney Halleck is a fierce warrior and trainer whose gruff, mentor-like presence contrasts well with Idaho’s friendly role.

Zendaya’s character Chani was the main disappointment in this film. Her lack of involvement sparked a lot of controversy on the internet, especially given that many watched the film solely to see her. Not only was she involved for a grand total of eight minutes, but they were a disappointing eight minutes. Chani does little in the actual film other than provide a vague form of motivation for Paul, who seeks her out over the course of the film. Chani was a disappointing female character easily superseded by Ferguson’s Lady Jessica, but still holds a lot of potential to become great in the coming movies.

The movie was visually stunning. The special effects used to develop the dystopian world were skillful, making the transition into Arrakis and the world of the Atreides especially immersive. I would watch this movie again just to experience the visual effects and cinematography once more. The costume designs and set designs were equally masterful throughout. Although the set of the planet Arrakis is just a lot of sand, the planet Caladan (the House of Atreides’ original home planet) is lush and sets a somber Gothic tone to the intro of the film.

The soundtrack was composed by Hans Zimmer, who is consistently incredible with all of his compositions. His work on “Dune,” however, provided a unique gravity to the scenes and made the movie expand outward from the screen until it seemed to surround you. The blending of unique instruments and sounds was symbolic to changes in the plot and the setting, and the repetition of musical motifs was purposeful and ominous, heightening the experience of the film.

Though boasting splendid cast, visuals, and soundtrack, “Dune” is hardly a perfect movie. My issues with the film fall into three main categories: breaking of immersion, religious iconography, and social commentary.

As previously mentioned, one of the main characters of the film was named Duncan Idaho. In a film where the main family is the House of Atreides, the villains are the Harkonnens, and the home planet is Arrakis, nothing breaks the viewers’ suspension of disbelief quite like a character named Duncan Idaho. It’s a recurring theme throughout the film: the main character is named Paul, his mother in turn named Jessica. Brolin’s character is named Gurney Halleck, a name neither immersive nor ordinary (it’s just weird).

The second point of concern, religious iconography, is not necessarily a problem. However, the excessiveness to which the Bene Gesserit operated like dictatorial nuns and Paul Atreides began to resemble Moses in the second half of the film was honestly too overplayed for a movie about sand politics. I personally could have done without the sentiment that Timothée Chalamet was a prophet for the people of Arrakis because of the white savior complex implications. Still, not necessarily a problem.

Finally, the movie’s worldbuilding was immersive enough that it just manages to fool you into thinking it’s not an expansive sermon about the Middle Eastern oil conflict. However, that’s exactly what it is, and this makes the whole story a little less fun for the watcher and a little more ‘eat your vegetables for a couple hours.’

“Dune” is certainly an odd film, one that leaves a distinct impression upon the viewer. It was both visually and auditorily stunning, with a brilliant cast and compelling characters. The plot is world-building centric, and simultaneously both action-packed and distressingly slow. Still, the movie is certainly good enough to warrant a watch, and only made more enticing by the promise of future films that satisfy what is left open-ended.

Nivedha Krishnan (Nivi) is a News Editor and a senior at Conant. This is her second year on the Crier Staff. At Conant, Nivi is part of the Public Forum Debate Team, JV Girls Badminton, Scholastic Bowl, and RISE. Outside of school, Nivi spends her time singing Carnatic Music (South Indian Classical Music), writing short stories, and trying new drinks (usually in the area of teas and coffee). She also enjoys watching TV shows/Movies from around the world and listening to a wide variety of music.