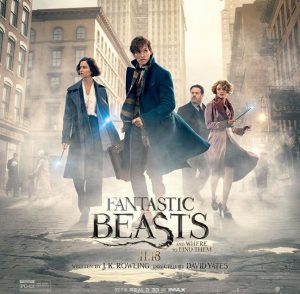 It’s been claimed that 2016 just might be the worst year ever, but for Harry Potter fans, it’s actually been pretty marvelous. The Potter renaissance has given us the Cursed Child, a long-awaited Pottermore Patronus test, and now the movie “Fantastic Beasts and Where to Find Them.” Written by J.K. Rowling herself, the newest addition to the franchise is based off her book of the same name and has proven to be nothing short of magical.

The movie begins by flashing the headlines of multiple wizarding newspapers across the screen. The dramatic stylistic effect is a nice way ground the viewer in the different time period, and immerse them in the magical world they may be returning to for the first time in years.

We are soon whisked off to New York in 1926, where the wizard zoologist Newt Scamander (Eddie Redmayne) is travelling with a briefcase full of fantastic creatures. When he accidentally lets out some of the animals, he must traverse the city to hunt down and recapture these destructive and chaotic animals.

The search delightfully gives the audience an enticing glimpse into American wizarding culture, like their government led by the striking and intimidating President Picquery (Carmen Ejogo), and their Prohibition-era speakeasies where goblins, house-elves, and humans unwind. It also shows off Rowling’s vivid imagination by introducing us to fascinating fantasy creatures that couldn’t possibly have been included in the original book series.

The cinematography is very well-done with a style consistent with previous movies, which comes as no surprise since director David Yates also directed the final four films in the original Harry Potter series. The details in each scene are incredibly rich; it may be worth seeing the film twice just to get a better look at the sets.

Redmayne’s charm and humor make Newt a likeable enough protagonist. However, the film doesn’t dwell much on his background or personality, so we never really get a chance to get attached to him the way readers are with Harry Potter, and he feels rather generic.

This is made up for by the phenomenal supporting cast. Newt enlists help in tracking down his creatures from Jacob Kowalski (Dan Fogler), a non-wizard Newt endangers when his briefcase is opened; Tina Goldstein (Katherine Waterston), a mousy but determined witch; and Queenie (Alison Sudol), Tina’s flirty, mind-reading sister. Having four characters that were each so different bond together was fun to watch over the course of the movie, especially due to a cute and unexpected romance between two of the characters. Fogler’s performance was hilarious as he learns about the ins and outs of the wizarding world.

As fun as it was to watch the group’s adventures unfold, it wasn’t enough to carry the plot of the two-hour movie. Unfortunately, this led to the addition of some less interesting and rather confusing subplots. Rowling attempted to introduce new concepts and rules of magic into the story, but they were poorly explained. However, since this is just the first movie of a five-part series, these issues will likely be addressed in better detail. The movie’s climax also lost some of its punch as it tried to be dramatic but bordered on ridiculous, but again, the intensity was necessary to give enough substance to fuel four more movies.

I had my doubts going into the theater about how Rowling could possibly adapt a book that was essentially a textbook encyclopedia, but the movie blew these concerns out of the water. Not only could seasoned Harry Potter fan find themselves at home within the story of “Fantastic Beasts and Where to Find Them,” but someone unfamiliar with the series could easily enjoy it as a standalone film. This is an impressive balance to achieve, but “Fantastic Beasts and Where to Find Them” manages to make it possible through the cast’s fantastic acting and Rowling’s seemingly boundless creativity.