‘How To Train Your Dragon: Hidden World’ ends trilogy on uplifting note 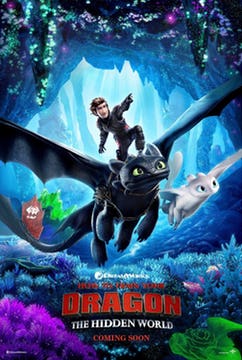 Dreamworks, a well known animation studio, has released many fun, family-friendly movies that have been part of many childhoods. With movies like “ The Prince of Egypt,” the “Shrek” series, and the “Madagascar” movies, Dreamworks has shown to have a wide sense of imagination and great minds for storytelling. This is most evident in one of their fan-favorite movies, “How To Train Your Dragon.” The third movie of this series, “How To Train Your Dragon: Hidden World,” is a fantastic ending to the rollercoaster ride that this franchise and its directors created.

The movie starts off action-filled and hilarious to prep you for what comes next. Unlike some movies that might start out with an unrelated opening to keep you attentive, the beginning scene of “How To Train Your Dragon 3” ties into the main problem by having Hiccup, the series’ main character, start off with an entertaining fight sequence. Later on, the crew of the movie uses the fight to confront a major problem throughout the movie.

This is the only movie of the three that does not involve enormous dragons as the main spectacle of the movie. Instead, it showcases a human being as the main antagonist, one who has a grudge to kill simply because of pride. However, the villain of the story is still very intelligent and interesting and is the kind to escalate situations to the extreme.

Another great factor that this movie extends on is the amazing relationship developments it offers with little to no talking. This is one of the main praises that the first movie gets, with its iconic scene of Hiccup and Toothless first bonding without any dialogue needed. The crew brilliantly created another scenario, but this time it includes Toothless flirting with a Light Fury he sets his eyes on. Throughout, many scenes show both dragons bonding and forming chemistry, all with the help of superb facial expressions and animal noises.

Lastly, the visuals and soundtrack provide a better experience while watching the movie. Each scene in the film looks like it was created to be an artistic masterpiece in an art gallery. Every object is so detailed that you can tell what a certain material might feel like without actually having to touch it. With the colorful lights, amazing flight scenes, and lively movements of the dragons, the animation team makes sure that you feel the child-like wonder you would have felt back when the first movie was released.

As for the soundtrack, it was composed by John Powell, a composer that had composed the last two “How To Train Your Dragon” movies. He was praised for having the ability to put forth the right emotions with powerful orchestral instruments and being able to capture the Viking theme. Powell had also collaborated with Batu Sener, Anthony Willis, and Paul Mounsey. Another composer, Jònsi, was the vocalist for “The Hidden World” and wrote “Together from Afar”. The collective soundtrack in these movies is one to be recognized for its strong choice of composers and composition. The soundtrack successfully conjures feelings of happiness, sadness, and excitement. Throughout, the songs accompany the scenes hand in hand, making the music feel natural and a part of this world.

While the first two movies were tear-inducing with heart wrenching endings and uplifting messages, the last movie makes sure you leave with tearful eyes and a smile. The series concludes by satisfying your love for the franchise, making sure you feel like a child full of imagination all over again.

Alaa is a graphic designer and a junior at Conant. This is her second year on the Crier staff. At Conant, Alaa is also involved in SAGA and the Art Club. Outside of school, she spends time to practice her art whenever she could.